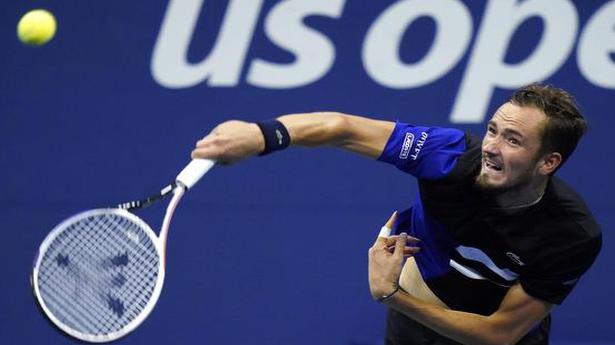 Third seed Daniil Medvedev continued his march towards a first Grand Slam title on Wednesday powering into the U.S. Open semifinals with a clinical 7-6(6), 6-3, 7-6(5) victory over childhood friend Andrey Rublev.

The first Russian duo in the quarterfinals at a Grand Slam since Igor Andreev and Nikolay Davydenko at Roland Garros in 2007, Medvedev showed no hesitation during a ruthless, controlled display that sends him through to the last four without dropping a set.

No player in the Open Era has won the U.S. Open men’s title without dropping a set.

He will face second seed Dominic Thiem, who put in a sublime performance to dismantle Australian Alex de Minaur’s challenge during a 6-1, 6-2, 6-4 victory.

The 27-year-old Thiem is the highest seed surviving at Flushing Meadows.

In the women’s section, a confident Victoria Azarenka overpowered Elise Mertens 6-1, 6-0 Wednesday to advance to the semifinals where she will face a familiar rival in Serena Williams, who won their encounters here in 2012 and 2013.

Azarenka, smiling and bobbing her head along to music being played during changeovers, spread the court with 21 winners to dominate 16th seed Mertens in their first career meeting.

“I don’t think I have ever enjoyed tennis, to be quite honest,” she said.

“I felt that it was a job and something you were meant to do. Winning, you enjoy it. Losing, I was so upset and for a couple of days I couldn’t function normally.

“Now nothing bothers me. I can say I am feeling the moment.”

Serena holds an 18-4 lead in their head-to-head matchups, winning their most recent match at Indian Wells last year.

“Can it get any better?” Azarenka said the semifinal showdown.

“It’s an amazing opportunity to play against a champion, somebody who I respect a lot and is my friend.”

Serena, seeded third, came from a set down to overcome unseeded Bulgarian Tsvetana Pironkova and keep alive her bid for a 24th singles Grand Slam title at Flushing Meadows.

Her comeback included two astonishing shots with her left hand that contributed to winning points.

“At that point I was fighting so hard. I was just trying to do everything I can whether righty or lefty,” she said.