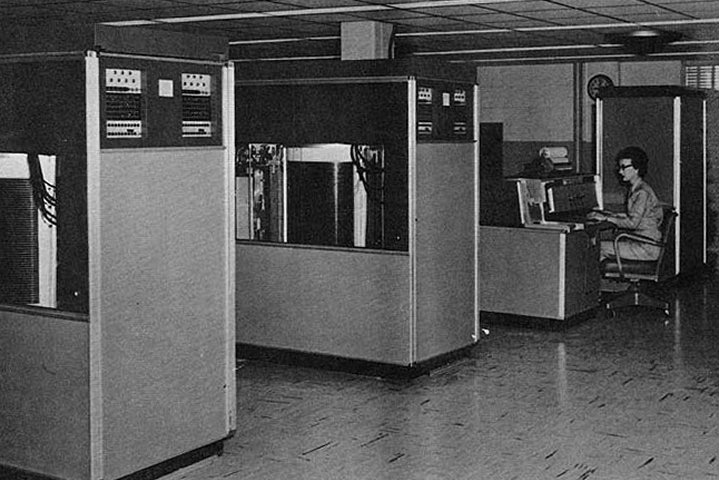 A few days ago, while looking for information about the Italian master Mario Monticelli (winner of Budapest 1926 and winner of a famous game against Bogoljubov in San Remo 1930), I found an article about a game that Monticelli played a Ramac 305, an IBM computer, in Milan in 1960 (!).

The IBM 305 RAMAC was the first commercial computer to use a moving-head hard disk drive (magnetic disk storage) as secondary storage. The system was publicly announced on 14 September 1956, with test units already installed in the U.S. Navy and private companies. RAMAC stood for Random Access Method of Accounting and Control, as its development was motivated by the need for real-time accounting in business.

It would be nice to know if experts of the history of “Artificial Intelligence and Chess” have information about the computer or its chess program. Perhaps we can see Ramac as the “secret grandfather” of Deep Blue? 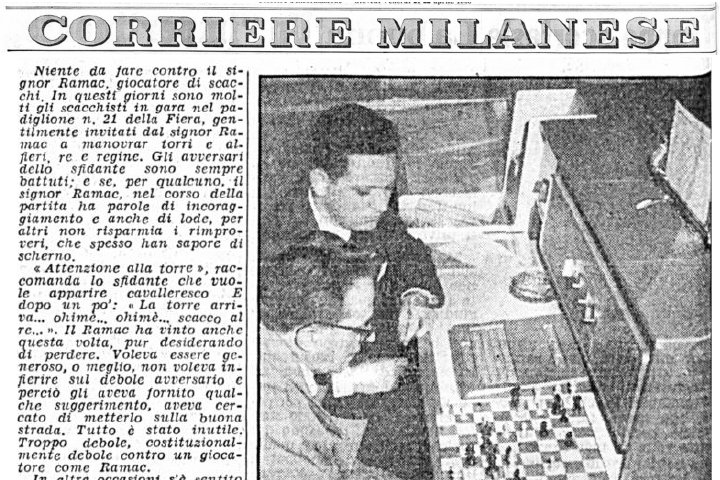 The article about the early duel “Man vs Machine” appeared in the evening newspaper “Corriere di Informazione” (part of the Corriere della Sera group in Milan) on April 21st and 22nd 1960, more than 60 years ago.

Below is a translation of the article (Calcolatore elletronico).

Nothing can be done against Mr Ramac, chess player. These days, in Hall 21 of the “Fiera Campionaria” fair in Milan, many compete, kindly invited by Mr Ramac to play with rooks and bishops, kings and queens. The challengers, however, are always beaten; and if for some Mr Ramac has words of encouragement and even praise during the game, for others he does not spare with reproach and sometimes mocking words.

“Beware of the rook,” recommends the master, who wants to appear chivalrous. And after a while: “The rook is coming … oh dear … oh dear … : checkmate!”

Ramac won again, although he actually wanted to lose. He wanted to be generous, or rather, he didn’t want to be ruthless towards the weaker opponent and suggested some moves to him. He tried to put his opponent on the right track. But everything was in vain. The opponent was too weak for a player like Ramac.

But who is this Mr Ramac? It is the Ramac 305, an electronic computer that also plays chess. He plays and wins. Once again, the machine beats the man. And the fact that Ramac is such a good player surprises and annoys the loser, who perhaps for the first time feels the humiliation of defeat.

Yesterday, to move rooks and bishops against Ramac, a man appeared, who for many years was Italian master and has won laurels not only in Italy. He is known for his victories against the best players of his time and for his victories against the always fearsome Russians. Even today, the chessboard holds no secrets for this outstanding player. Nevertheless, he too suffered a defeat at the hands of Ramac.

The player and the operator took their seats in front of the control panel – a rectangular dashboard. By tapping on the keyboard, the operator transmitted the player’s move to Ramac. Red and yellow lights lit up on the control panel: Ramac is about to give the answer. The counter-move is the best answer and has been selected electronically from the “memory”. This is a kind of cabinet to which the panel is connected, visible to the left of the chess player. The processing unit is ready to “find the best move” and the answer comes with a comment.

Ramac realised – which shows how good he is – that this time he was up against a very strong player. Who was still doomed to lose. “You’re a good player,” Ramac said at the beginning of the game. He seemed to encourage his opponent, but immediately afterwards came a warning: “You play well, but I will still win”.

The player is fully focused, but Ramac is also ready and almost mocking: “You try to save yourself in vain.” Then he seems to appreciate the play of his opponent: “That was a good move.” He finishes with a somewhat sarcastic remark: “The game could have gone on, but the result wouldn’t have changed.”

Ramac mated his opponent. However, to partially justify the defeat, it must be said that no tournament game was played. Ramac can calculate hundreds of thousands of moves but it was not built to play chess. It is an electronic computer that can “also” play chess, to give an original and entertaining demonstration of its enormous capabilities. Memory, flexibility, working speed: these are its virtues.

Silla Mario Monticelli was born in Venice on 16 March 1902 and in his active days he was one of the strongest Italian players. He was a journalist by profession. Monticelli won several tournaments in Italy and also became known outside the country when he won the 1926 FIDE Congress in Budapest, together with Ernst Grünfeld, and ahead of some well-known players such as Rubinstein, Reti and Tartakower. In 1929, 1934 and 1939 Montecelli became Italian national champion and from 1927 to 1936 he played in six Chess Olympiads for Italy. 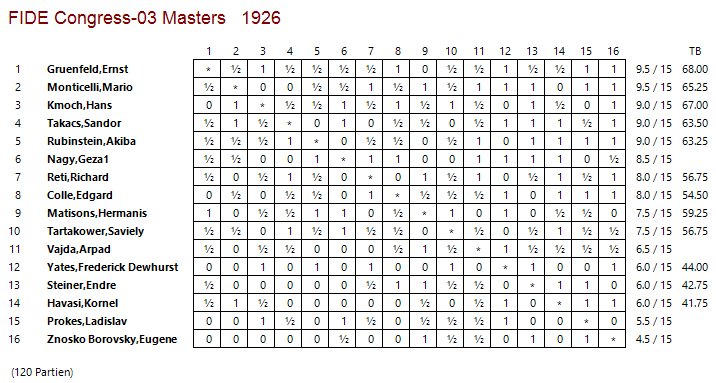 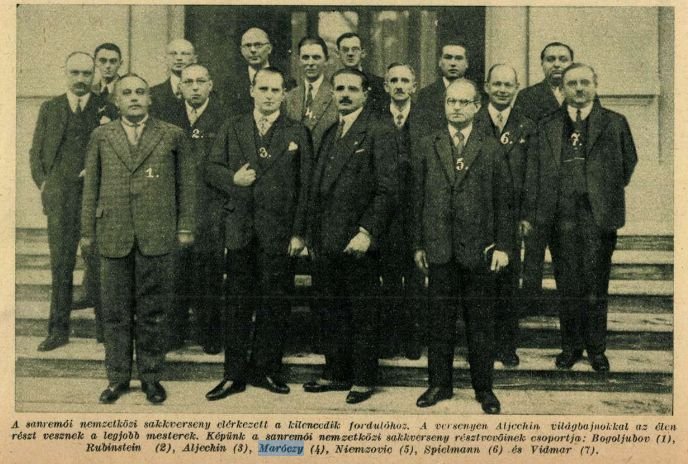 The participants of San Remo 1930. Monticelli is in the back, second to the left. 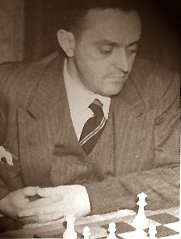 During World War II Monticelli was drafted, and in 1943, when he refused to cooperate with the Nazis, he was sent to a concentration camp. On 19 July 1945, he returned to Venice. After the war he first worked for “Il Populo” and to do so moved to Milan, where he won the City Championship in 1948.

Monticelli later worked for the “International News Service” and then at the “Corriere della Serra” as head of the foreign department. In 1950 the FIDE awarded the title of an International Master. After his retirement Monticelli still ran the chess column in the “Corriere della Serra” and among other things accompanied the World Championship match between Fischer and Spassky 1972 in Reykjavik intensively. In 1985 the FIDE made him an honorary Grandmaster. Mario Montecelli died in Milan in 1995 at the age of 93.