Home Chess The beauty of the queen sacrifice

A queen sacrifice in chess is the most electrifying concept in the cerebral game. Whenever we come across one, we exclaim “Aha”! out of befuddlement. Altogether, it is a rare concept. The sheer strength and beauty of the queen sacrifice is that it leads to a crushing checkmate.

In this week’s featured game, International Master Edward Lasker used this method to record a win against George Alan Thomas in London in 1912. Lasker, who was born in Germany, but emigrated to the US in 1914, was a five-time US Open champion and was a friend as well as distant relative of the great world champion Emanuel Lasker.

Without the assistance of computer technology at the time, Edward Lasker had to see into the combination and actually feel it before he parted with his queen. The diagram demonstrates the position of the move before the queen is sacrificed for the h-pawn. It was White to move and win. 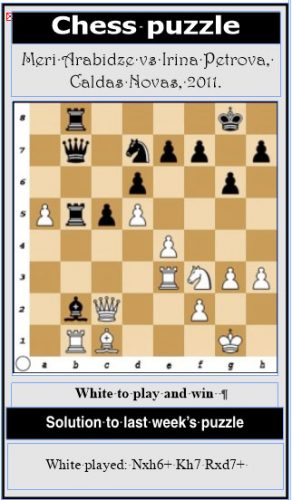 Oreste D’Arconte: Yes, you can play chess in quarantine

Had plans to be a Kabaddi player, 23-year-old Pakistan all-rounder says

Exclusive: Abhishek Bachchan’s Docu-Series ‘Sons Of The Soil’ Will Make You...

Texas gyms see an influx in members ahead of the “New...

Physio not coming out after Jadeja getting hit is breach of...

Police and firefighters rush in after ‘arson attack’ on Louth home

Outdoor yoga and brunch merge in a fun, local offering –...

Puzzle Game Not Chess Launches On December 8 With Pre-Orders Available...

Romain Grosjean on his 28 second struggle: ‘It couldn’t be my...

India vs Australia: ‘Jadeja got knock on side of head, he is...

Balancing my studies alongside being a professional athlete

7 ways you didn’t know yoga could make you better at...