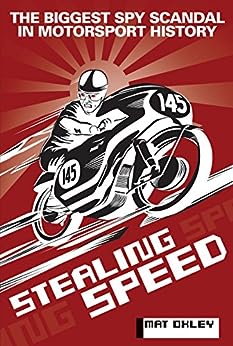 The remarkable true story of how one of Japan’s biggest motorcycle manufacturers stole a Nazi rocket scientist’s engine secrets from behind the Iron Curtain to win the motorcycle power race and conquer the world.

In 1961, with the Cold War at its height, East and West were battling for supremacy on the racetracks of Europe. Using technology from the Nazis’ notorious V-1 flying bomb, East German factory MZ built the world’s most powerful race bikes. But when MZ rider Ernst Degner was poised to win the world championship he defected and sold MZ’s secrets to Suzuki, while his wife and children were drugged and smuggled through the Berlin Wall. Within months Japan was on its way to ruling the world of motorcycling. Branded a traitor by the Communists, Degner suffered horrific injuries in a fiery racing accident and died in mysterious circumstances. Stealing Speed is a breathtaking story of racetrack heroics and Cold War skulduggery.