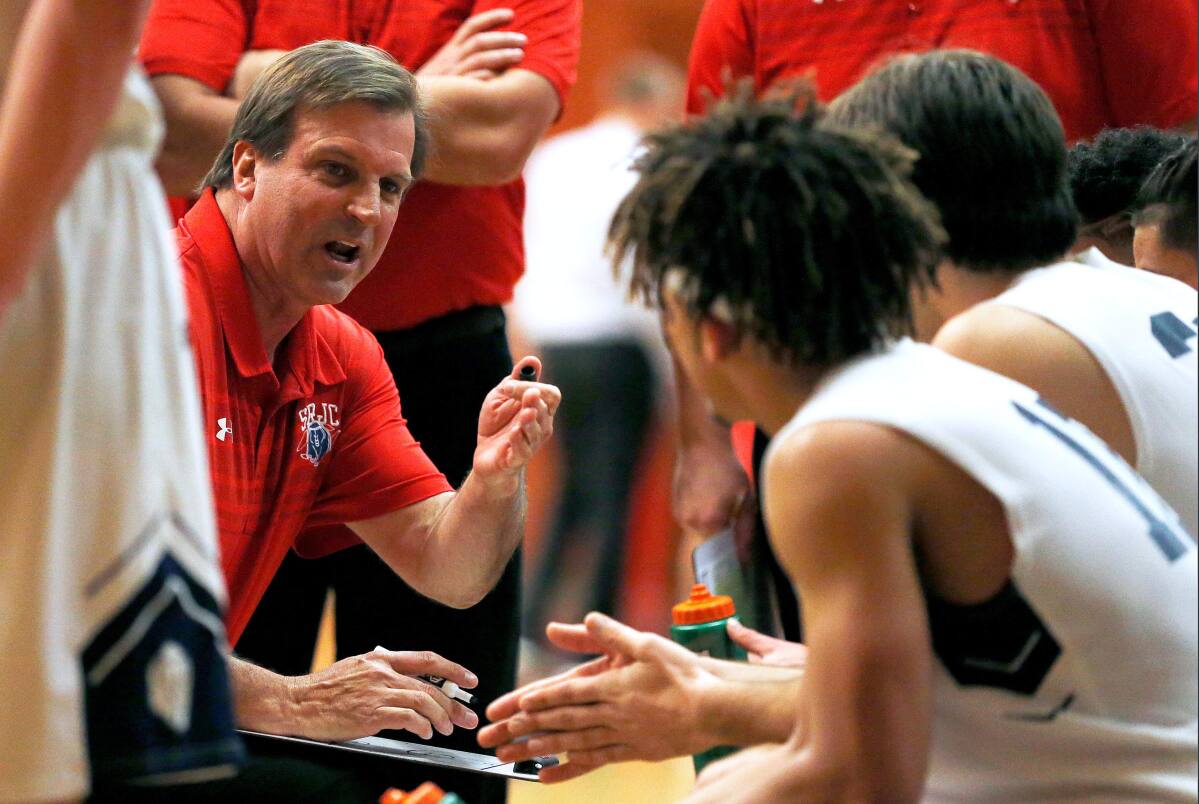 As a player, he led Cloverdale High School to state championships in 1983 and 1984 and starred for the University of Arizona in a run to the Final Four in 1988.

As a coach, he guided the Bear Cubs to a California community college championship in 2014.

McMillan, 54, has a record of 425-196 in his 20 years at the helm of the SRJC program. He has built one of the most respected community college basketball programs in the state, one that competes with teams from much larger metropolitan areas. He said he plans to finish his coaching career with the Bear Cubs.

“SRJC has been a great place to work. I have been really fortunate to have a lot of support from local high school coaches and good players in the area,” McMillan said. “It helps to have fans. Junior college basketball in California does not draw well, but we draw better than average. A lot of areas look down on junior colleges but not in Santa Rosa. This school is really respected.”

McMillan grew up playing ball as a kid in his hometown of Cloverdale under the tutelage of his father, John, who was the head coach of the Eagles for 24 years. McMillan, a 6-foot-6, 190-pound guard, combined with several other homegrown stars, including Craig Bergman, to light up the gym in Cloverdale and win the Division 3 NorCal championship (prior to state titles) in 1982. In McMillan’s junior and senior seasons (1983 and 1984), the Eagles won the first two California state titles in Division 3.

“Cloverdale has always had great sports teams. We played basketball growing up together,” McMillan said of his Eagles teammates. “It was a good run that we had.”

When McMillan graduated from Cloverdale in 1984, the Eagles had won 48 straight games. He finished with a 25-points-per-game average his senior year and was heavily recruited by Arizona, UCLA, Stanford and Idaho. He chose to play on a four-year scholarship for legendary Arizona coach Lute Olson.

“Lute sold me on the fact that the program was getting turned around,” McMillan said. “Lute was a great guy to play for. He demanded people play unselfishly and be held accountable. He was tough. A lot of guys at Arizona were successful in life from the discipline that you learned in the program.”

McMillan cracked the starting Wildcats lineup as a shooting guard late in his freshman year and was a starter his final three years. McMillan played with a cadre of star teammates (Sean Elliott, Steve Kerr, Tom Tolbert, Anthony Cook, Jed Buechler, Kenny Lofton and Joe Turner) and was a big part of the team that went to the Final Four in 1988 and lost to top-ranked ranked Oklahoma.

McMillan averaged 9 points per game at Ariona and was 12th on the school’s all-time scoring list when his Wildcats career ended.

“My height made up for my lack of speed,” he joked.

McMillan wanted to play professionally but that opportunity never materialized.

“I was on the Pistons for the NBA summer league, but they didn’t really look at me. I realized I wasn’t getting a serious look. I was looking at playing in Portugal, but it fell through,” McMillan said. “My goal was always to make the NBA and I didn’t do that, but I also always wanted to coach.”

After graduating from Arizona in 1989 with a degree in economics, McMillan spent seven years as an assistant coach to Kevin O’Neill at Marquette (1989-94, where he also earned an MA in Sociology in 1991), and Tennessee (1994-96). After the second Volunteers season, McMillan decided it was time for a change.

“I didn’t want to stick with what I was doing,” McMillan said.

“It was right after the Gulf War, so Kuwaitis liked Americans a lot. It was a lot of palm trees and sand,” McMillan said. “Lebanon is a beautiful country in a lot of ways. We had fun in both places. I didn’t plan on doing it forever. It was never a long-term plan. Overall, I am glad I had the experience.”

He heard about the SRJC coaching job from a friend, flew back to interview and landed the job in the spring of 2000, first coaching the Bear Cubs in the 2001-02 season. He earned a master’s degree in physical education in 2001 from the United Sports Academy and has also taught at SRJC in addition to coaching.

He has run successful program in his SRJC tenure, having only one losing season (2015) and missing the postseason only twice in 20 years. In the 2013-2014 season, the Bear Cubs (26-8) won the state title over San Bernardino Valley College.

BackBenchers - November 26, 2020 0
Price: (as of - Details) Omtex cricket balls are systematically made for every cricket player who wants to improve their bowling skills. Omtex...

Kenya bounce back to thrash Libya after slow start to Online...

Have Been Focussing More on My Goal-scoring Ability, Says Shilanand Lakra

Imperative for Me to be on Top of My Game and...

There’ll be no excuses from our end: Matthew Wade on training...

Nitin Tomar unfolds his Do-or-Die raid from the 2016 Kabaddi World...

Abhishek Bachchan on Sons Of The Soil docu-feature: ‘It will engage...

Australian Open ‘most likely’ to be delayed: Victoria sports minister