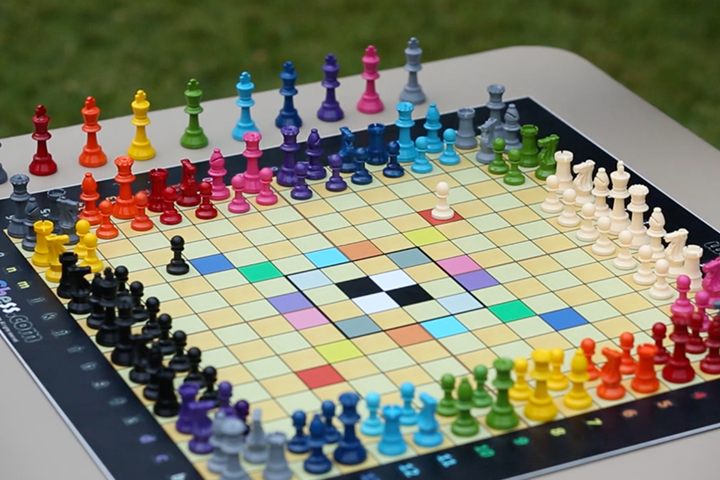 Chess variants are fun. They let you take a break from the “real game” and at times even help to improve your chess skills.

Sovereign chess steps in to the circle of chess variants but has many unique twists. The creator of the game, Mark Bates, extended the normal chessboard to double the size. Now we deal with 256 squares instead of 64. Furthermore, we don’t only have black and white pieces, but ten more colours joining the fun.

Our head starts to spin when we discover that we can use any other colour to make moves if we step on the same-coloured square on the board.

The rules of Sovereign chess

(By clicking on the picture, you can expand its size) 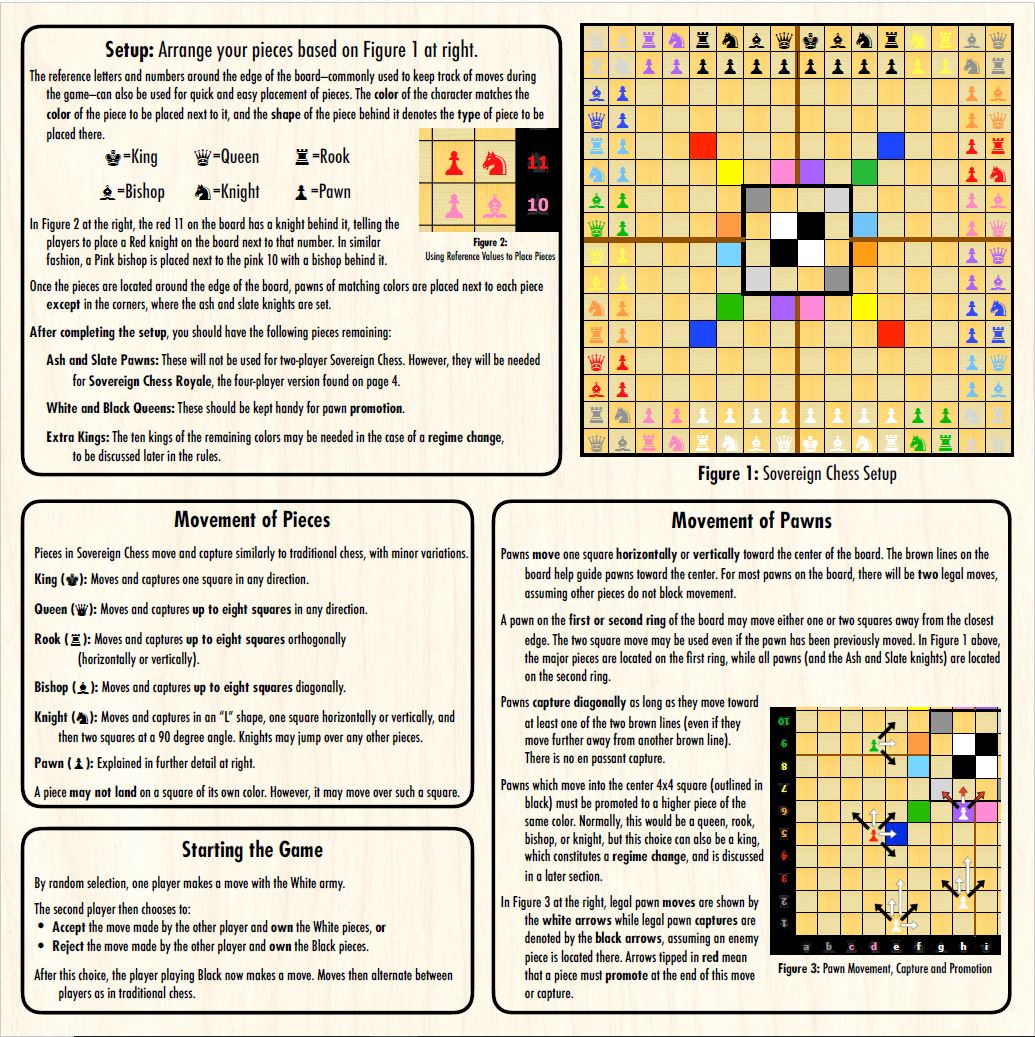 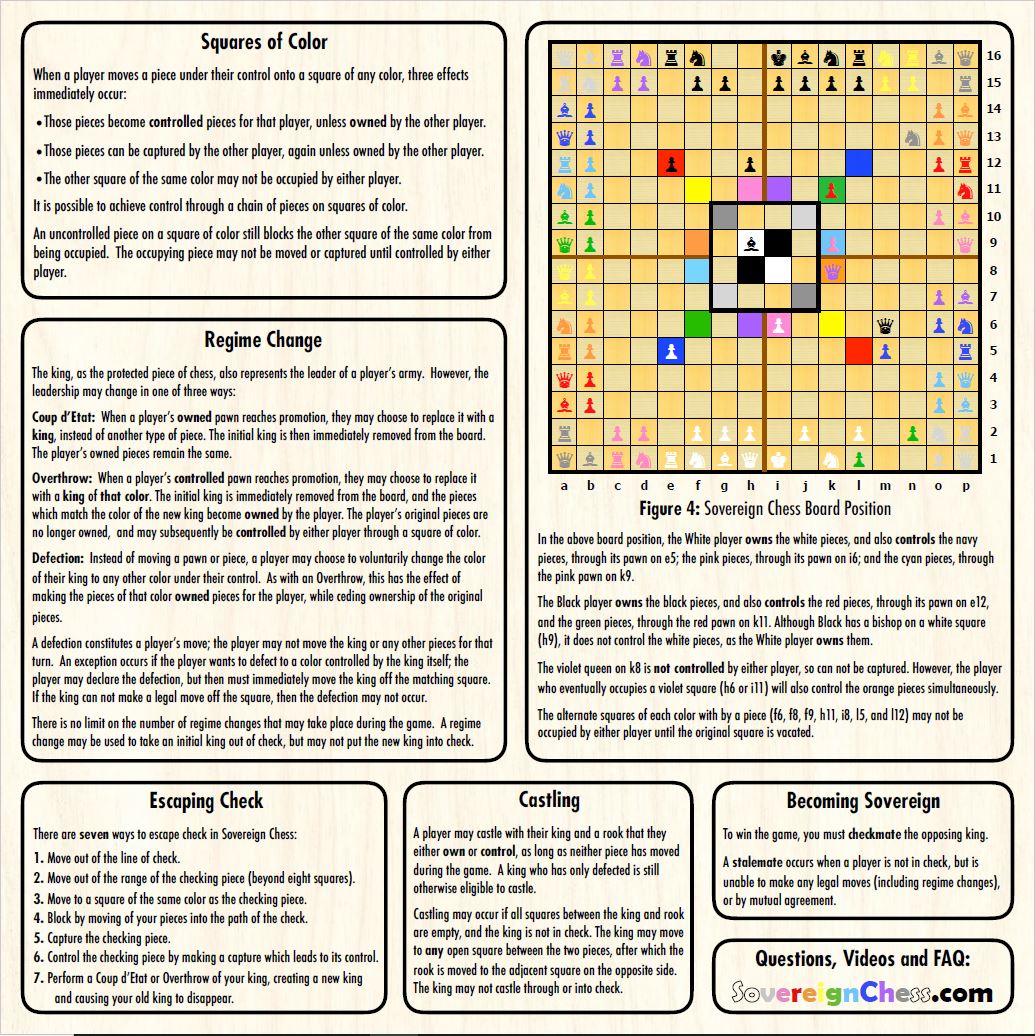 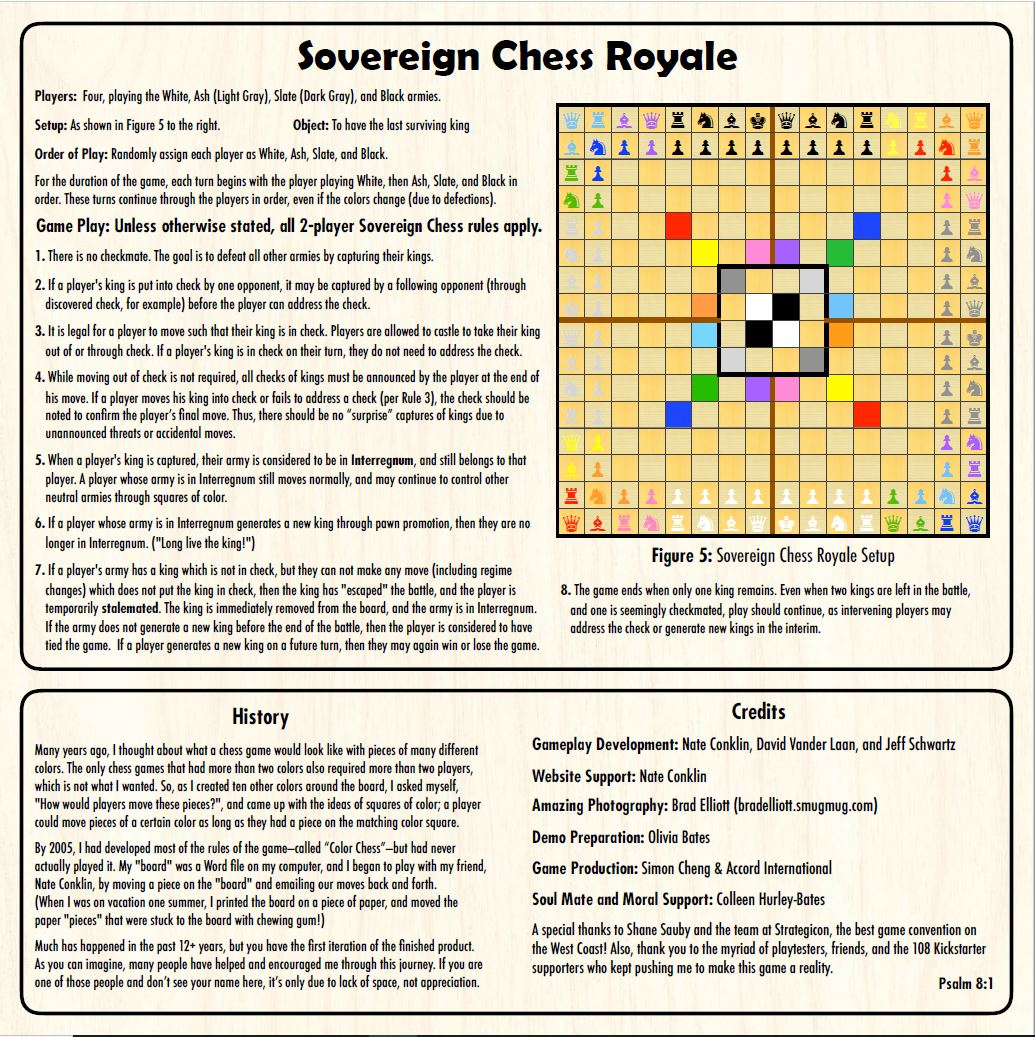 An interview with the creator of the game – Mark Bates

“A good variant should enhance any person’s ability to play traditional chess, just like football athletes may train in different activities to become better in their sport.”

Arne Kaehler: Hello Mark, thank you for having the interview with us. Can you tell us a little about yourself, who you are, what you are doing?

Mark Bates: Thanks for this interview time! I am a Professor of Mathematics at Oxnard College, and live in Santa Barbara, California, in the U.S. While I am fortunate to live in one of the most beautiful cities in the world, right now I am mostly home, teaching my statistics classes online due to the pandemic, which is still out of control. My wife is the Lead Pastor of a local church, and my daughter is a high school senior, looking forward to (hopefully) attending college next year.

In my spare time, I enjoy watching sports, especially soccer (football), but of course, I like designing and playing games!

AK: What is your personal background with chess?

MB: As a game lover, chess was one of the first games I played and explored. I enjoy both the tactical precision of the game, as well as the unique strategies that different players employ. I played in the Chess Club in high school and college, and while I would not say I am the strongest player, I enjoy following tournaments and revelling in the skill of the world’s top competitors.

AK: Sovereign Chess is a great looking, and interesting chess-board variant. How did you come up with the main idea for the game?

MB: I was looking for a variant that used pieces of many different colours. However, in all of my exploration into variants, the only ones that used more than two colours were those which had more than two players, but I wanted my variant to be a strictly two-player game.

The unique game mechanic which allowed this to work was the “squares of colour”, which let a player control a particular army, as long as one of those squares is occupied. By placing those squares in the center of the board, they draw the white and black pieces out from safety, so those players can quickly control other armies. Players can have a “chain of control”, where one of their controlled armies can occupy another coloured square, and thus control a different army, and so on. 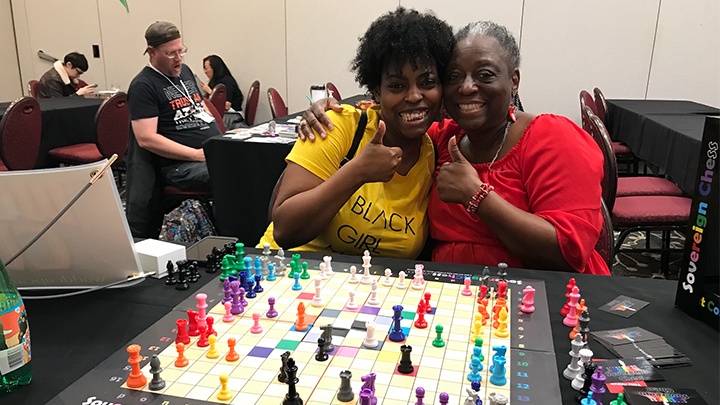 This main idea of the game has remained the same through years of play testing, feedback, and eventual production of the game. Ironically, I have also developed a four-player variant, but there are still many “neutral” armies which are up for grabs!

AK: Have any titled chess players played the game yet, or helped you with the making?

MB: I am not aware of any ranked or titled players who have played the game…yet! In my experience, many strong players feel that it is a distraction to play variants, perhaps with the exception of dabbling in a game of Chess960. However, I have played with many chess fans who tired of trying to memorize openings—which often seems like a necessary evil of trying to be a stronger player. I would love, though, to get feedback from a 2000 rated player and get their input!

AK: How do you believe, the game can help develop your chess strength in a normal chess game?

MB: A good variant should enhance any person’s ability to play traditional chess, just like football athletes may train in different activities to become better in their sport. Sovereign Chess offers many different angles of attack, depending on the armies one is able to control, and requires someone to “press their advantage” when in a superior position over their opponent. Also, I enjoy the process of seeing how a player can close out the endgame, which is certainly a skill which transfers to traditional chess.

One core value that I wanted to keep in Sovereign Chess is that pieces move like traditional chess. Knights move like knights. Queens move like queens. Pawns…well, almost move like pawns. But the game is very intuitive, which is why I’ve had five-year-olds learn to play Sovereign Chess in five minutes!

AK: What can we await from you in the future? Do you have any more games in queue?

MB: I’m currently working on a card game called “World Cup!”, where you select a handful of countries from a past or future World Cup tournament, and try to lead one of them to glory! In this time where sports have been delayed or limited, anyone can open the box and play the entire tournament…in an evening! I’ve had both football and non-football fans alike enjoy the game, and I hope to release it in 2021! 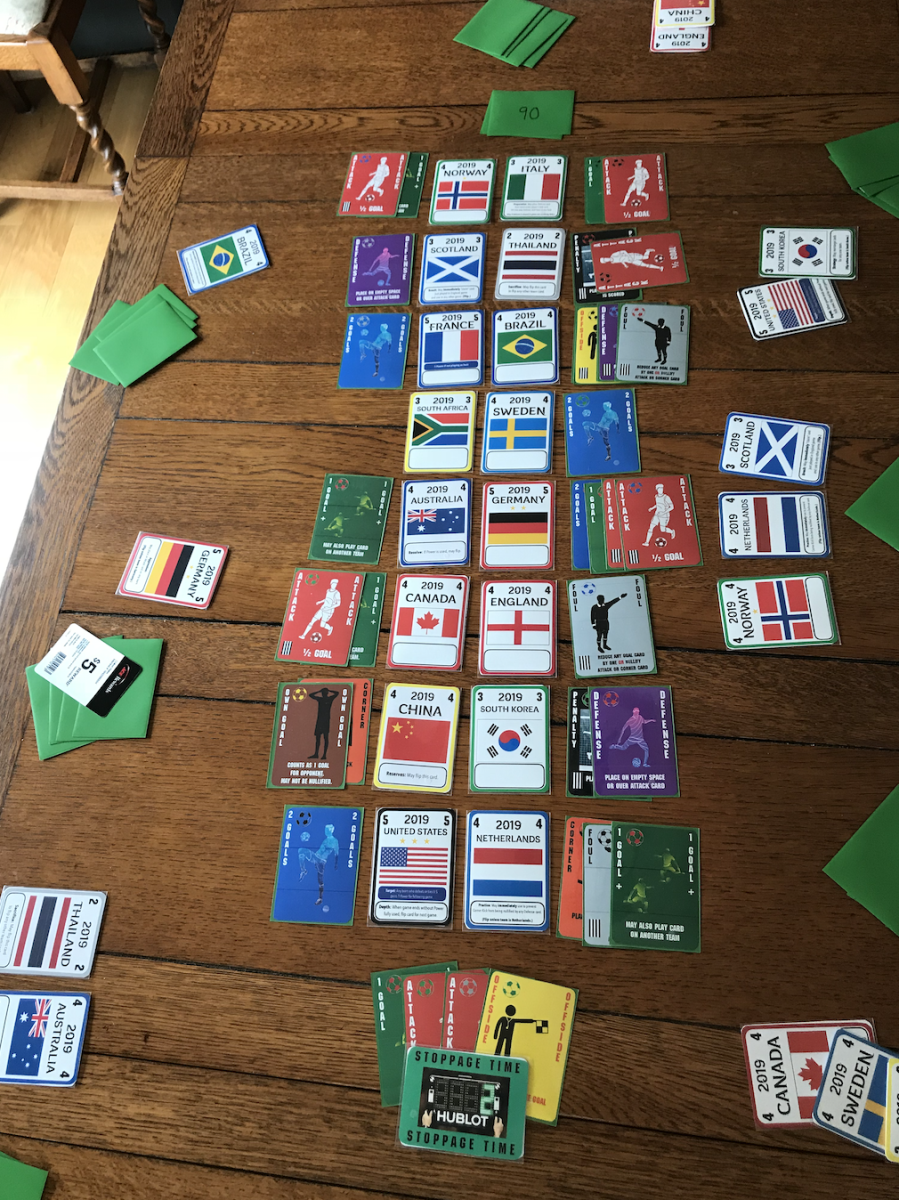 The newest game by Mark Bates is called “World Cup!”

AK: Thank you very much for the interview and your effort in making something remarkable which is chess-related.

MB: It is my pleasure! Thank you for having me!