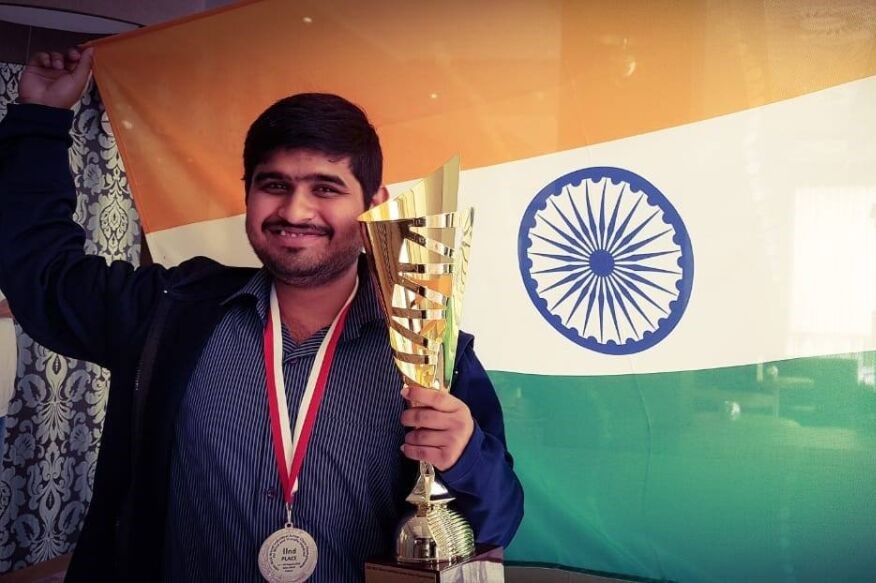 Chess is not just a sport, it is a social tool

Chess is not just a sport, it is a fantastic social tool. It binds people together and empowers them. If you think about it deeply, it is the only sport where the visually impaired can fight on equal terms with sighted people. When a visually-impaired player faces a sighted individual in chess, no change in rules are required. Only the equipment needs to be changed a bit. A visually-impaired chess player needs a braille board, everything else remains the same. It does not come as a surprise that visually-impaired players who have succeeded at chess have also seen a surge in their confidence levels in other areas of life.

Take the example of Mr. Charudatta Jadhav, the current President of AICFB (All India Chess Federation for the Blind) and IBCA (International Braille Chess Association). Charudatta Jadhav was born with normal vision, but when he grew up he slowly started to lose his sight. This affected his confidence tremendously as he could no longer feel at ease when interacting with sighted people. That is when Charudatta turned to chess.

Every victory at chess made Charudatta believe that disability would not come between him and his goals in life. Very soon, he achieved his FIDE rating — he was the first Indian visually-impaired player to do so. In 1997, he formed the All India Chess Federation of the Blind and has been responsible for the growth of blind chess in India over the years.

Things did not end there. Charudatta’s increased confidence helped him to become the head of the Accessibility Centre of Excellence in TCS. He also earned a Ph.D. in computer science and is the current president of IBCA (the equivalent of FIDE for blind chess!). It is amazing what chess did for a young boy who had seemingly lost hope in life.

The Fashionable Caro-Kann Vol.1 and 2

The Caro Kann is a very tricky opening. Black’s play is based on controlling and fighting for key light squares. It is a line which was very fashionable in late 90s and early 2000s due to the successes of greats like Karpov, Anand, Dreev etc. Recently due to strong engines lot of key developments have been made and some new lines have been introduced, while others have been refuted altogether. I have analyzed the new trends carefully and found some new ideas for Black. 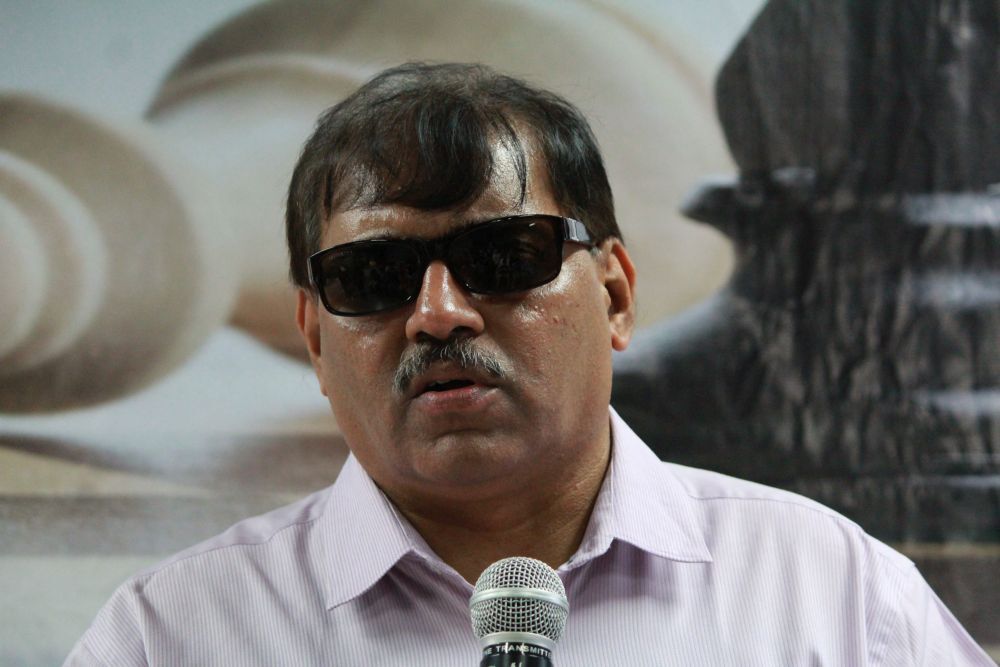 Once we understand why chess is such an important tool of self-improvement for visually-impaired chess players, we realize how critical it is to ensure that the proper tools are given to them to get better at the sport. One wonders, how do chess players improve at chess? How do they work on the sport when they cannot read the books nor see what is on the computer screen? This is where a screen-reading software comes to the rescue.

A screen-reading software like JAWS or NVDA helps the visually impaired to move the cursor via their keyboard and read out the words that are touched upon on the screen. With regular training and repetition, blind chess players become more and more comfortable with the sound of the screen-reading software. Here’s a video that gives you an idea as to how the blind chess players navigate the information on a computer or a mobile screen. Sit tight, their speed might just blow you away!

While the screen reader does a wonderful job of empowering the visually-impaired people, there is a very specific problem that chess players face. Let’s have a look at the ChessBase screen:

Learn from the Classics

Sagar Shah shows you on this DVD how you can use typical patterns used by the Master of the past in your own games. From opening play to middlegame themes. 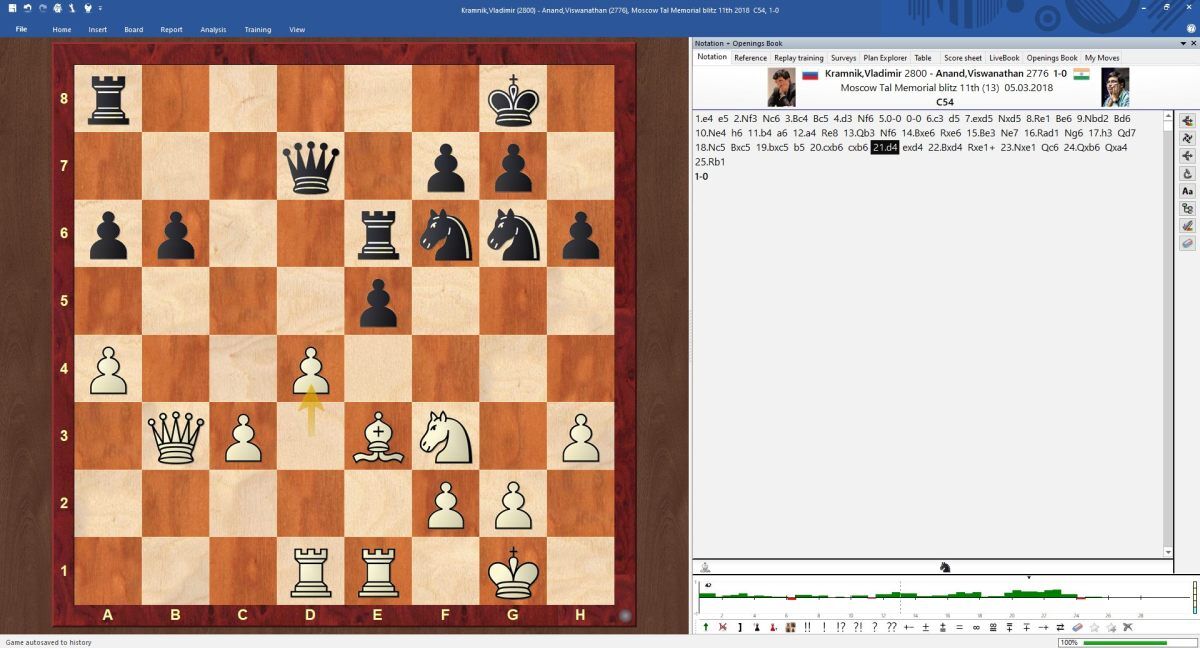 The screen reader would do a good job of reading through the menus at the top, the tabs at the right and the notation. What it fails to do is to tell you exactly where the pieces are on the chessboard. It does not read out that the white king is on g1 and the queen is on b3. This is why visually-impaired players always face difficulties when a new position is presented.

In the above case, the game starts from the initial position, and hence they can play over the moves one by one to reach the current position. But sometimes these moves are not available. It would help if the screen-reading software would read out the position of the pieces on the board. While this is a problem right now, Soundarya Kumar Pradhan, one of India’s top visually-impaired chess players (Elo 1746), decided to find a solution.

When you click the Copy Position button on ChessBase, a FEN string is copied to the clipboard. 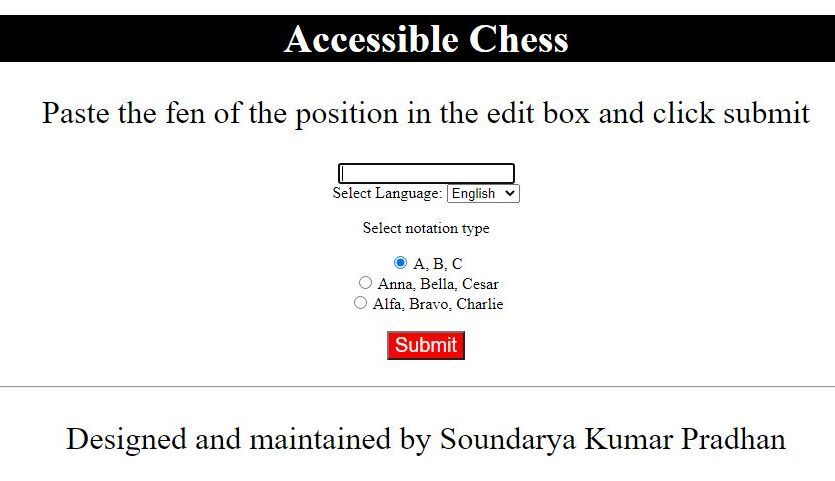 The entire position is written down and the screen reader is able to read it out to you along with who is to move! This eases the life of a visually impaired chess player considerably and he can continue his chess practice without any impediments

I would like to thank ChessBase India Foundation, FIDE and Nihal Sarin* for their generosity. I would also like to thank Ayushi Sharma and Sanjeevan Pathak for their contribution. With this fund of Rs.33,000 I intend to improve the quality of my website.

(*) In a stream where Nihal Sarin received the best game nomination for Gazprom Brilliancy prize for the World Youth Championships, Soundarya was invited along with his brother Prachurya (who is also 100% visually impaired). Soundarya was awarded Rs.15,000 by Nihal Sarin. This amount was what FIDE was paying ChessBase India for the work done on the Gazprom Brilliancy Prize!

We wish Soundarya the best in his endeavour to improve the current state of chess world. We, at ChessBase India, will support and help him in order to bring about a change! A huge thanks to all the viewers who have supported him and encouraged him in his journey.