Home Badminton ‘Saina deserves a biopic and I am glad she is getting one’, says...

HYDERABAD:  No sooner had the trailer of Saina released than Hyderabadis went berserk seeing the Hyderabad ki shaan on the silver screen in all her glory.

Saina is an upcoming Hindi biographical sports film directed by Amole Gupte and produced by T-Series and Front Foot Pictures. The film is based on the life of the shuttler.

Starring Bollywood actor Parineeti Chopra as Saina Nehwal, the film which was to release in September 2020 and got postponed due to the Covid-19 pandemic is now set to have a theatrical release on 26 March 2021.

From mid-June, Parineeti has been training to play the shuttler and the film crew apparently built 12 badminton courts for the movie.

Did Saina ever think she would have a book (which was released a few years ago) and a biopic to her credit? Was it just a logical culmination of all her accomplishments or was it a ‘goosebumps’ moment? While Saina was busy at the Swiss Open series when Express reached out to her, her dad Harvir Singh Nehwal shared her thoughts on her behalf. Saina now joins the league of sportspersons such as cricketer MS Dhoni, wrestler Babita Phogat and Indian track and field athlete Milkha Singh.

“We hail from Haryana and when Saina was nine years old in 1998, we never thought she would even become an athlete. We settled down in a house at Rajendra Nagar and she had finished Class IV and as she could not get an admission that year, she was at home and learned judo and karate to keep herself engaged along with a group of some underprivileged children.

We realised Saina was getting flexible. One day, I happened to visit LB Stadium and that’s where I met badminton coaches Nani Prasad and Arif and they said they would train Saina. That’s how her journey began and her climb has been steady. Incidentally, the last three years have been her peak in her career. From Asian Games to Olympics, Commonwealth and National Championship, she managed to win all the tournaments. 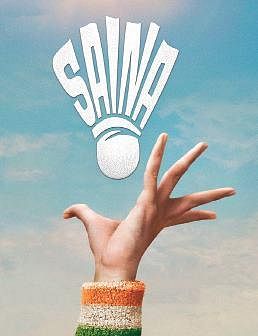 That’s when Mumbai-based Front Foot Productions reached out to my manager asking us for permission to make a movie on Saina. We interacted with director Amole Gupta who gave us a hearing of the story and we loved it. They bought the rights and after that, there hasn’t been any other intervention from our end. Now that the movie is set for a release, the producers asked if Saina could be seen and heard during the promotions of the movie.

Saina has been Commonwealth Gold Medallist which no other player has achieved so far. So the movie seems apt for an athlete who has given so much to the country. Saina deserves a biopic and I am glad she is getting one,” says dad Harvir.