The PRO Chess League finals are six days away, so it’s high time to take a closer look at the four teams that will be fighting for the title. Today: the Armenia Eagles.

The PRO Chess League finals will take place on September 25-27 on Chess.com/Live with commentary on Chess.com/TV. Below are the four teams and their lineups.

We are providing a closer look at all four teams and their roads to the finals. In this article, the focus is on the Armenia Eagles.

The most active player for the Eagles has been GM Zaven Andriasian with 28 games—with 20 points also the MVP. Both teenagers GM Haik Martirosyan and GM Shant Sargsyan played 24 games, scoring 17 and 18.5 points respectively.

Of these three, only Martirosyan is on the team for the finals. Free agents GM Parham Maghsoodloo (who just turned 20 last month) and GM Raunak Sadhwani are junior players as well, while the experienced GM Tigran L. Petrosian (if we follow FIDE’s spelling) completes the squad.

Petrosian is the only player of the four that play in the finals who played three full seasons for the Eagles. Since he did not play in the finals in 2018, when the team won the championship, the Armenian lineup is completely new compared to two years ago.

The moment the Armenia Eagles won the final in 2018.

The Eagles had a most impressive pre-playoffs season in which they beat all of their eight opponents, including a co-finalist: the Chengdu Pandas. This way they reached the quarterfinals of the playoffs directly and for the third time in as many attempts.

That round-two win for the Eagles against the Pandas meant revenge for their loss in the match for third place in 2019, although it was also the Pandas that they beat to claim the 2018 title—a final that could be repeated this year.

As the division winner, the Eagles were seeded straight into the quarterfinals where they beat the New York Marshalls 9.5-6.5. The Man of the Match there was Petrosian, who scored 3.5/4.

Here’s his impressive win with the black pieces against GM Vladimir Fedoseev.

We’re seeing the Armenia Eagles for the third time in the finals. After their 2018 title, the team finished in fourth place in 2019.

Petrosian and Sadhwani have the most PCL experience, with the latter being the only player to have played in all four seasons (despite being the youngest of them all), two for the Eagles and two for the Mumbai Movers. 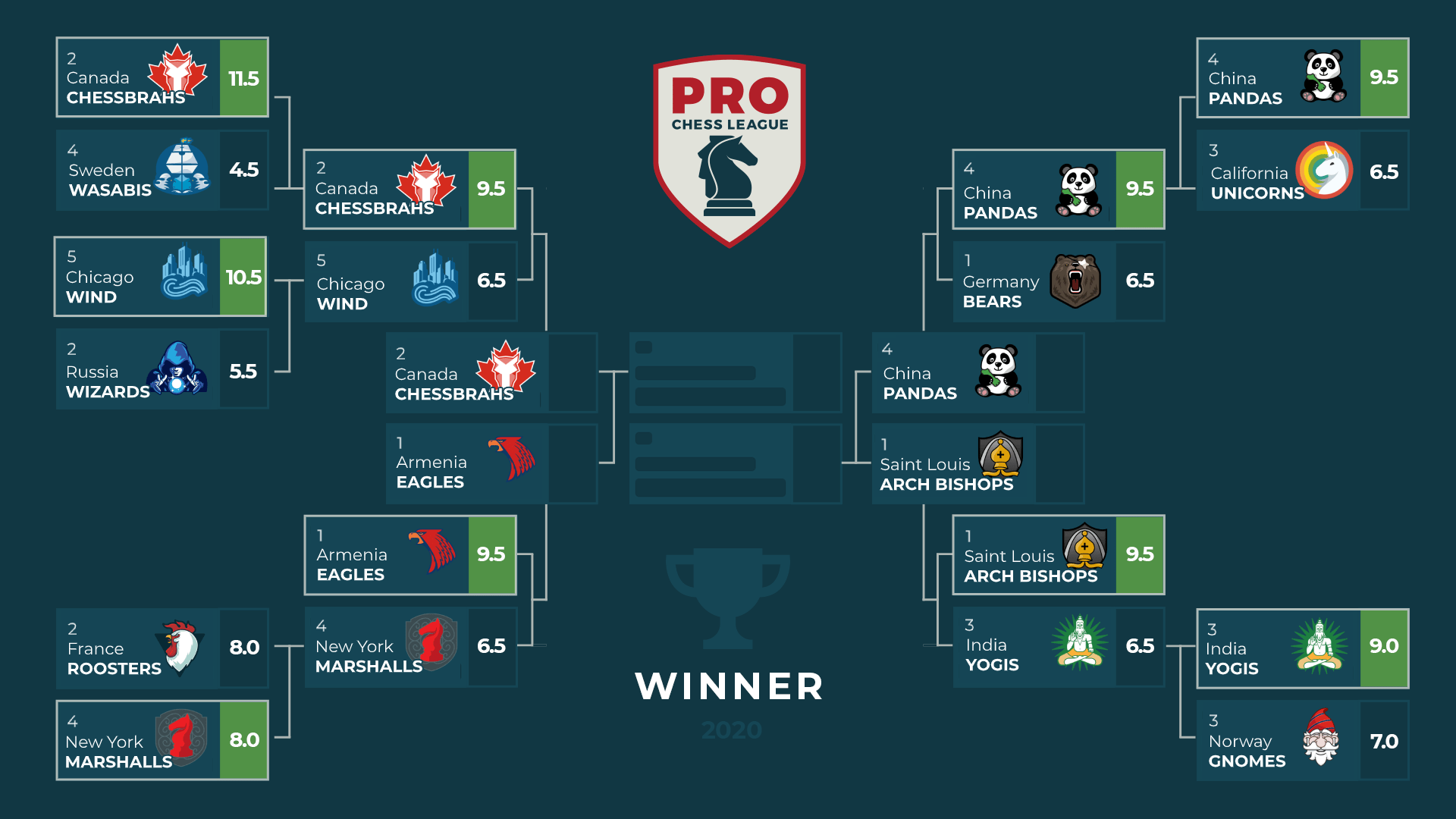 The PRO Chess League finals will take place on September 25-27 on Chess.com. For the semifinals on Friday, Sept. 25, the Eagles face the Chessbrahs, an opponent they have never faced before that makes its debut in the PCL finals.

The other semifinal is played between the Arch Bishops and the Pandas. The two losing teams will then face each other on Saturday, Sept. 26, for their fight for third place, while the big final is scheduled for Sunday, Sept. 27.

Like in the regular season, time control for all games will be 10 minutes plus a two-second increment. Every player on a team will play every player on the other team for a total of 16 games. The four finalists will be competing for a $40,000 prize fund with $20,000 going to the winner. All matches will be streamed live with expert commentary on Chess.com/TV.