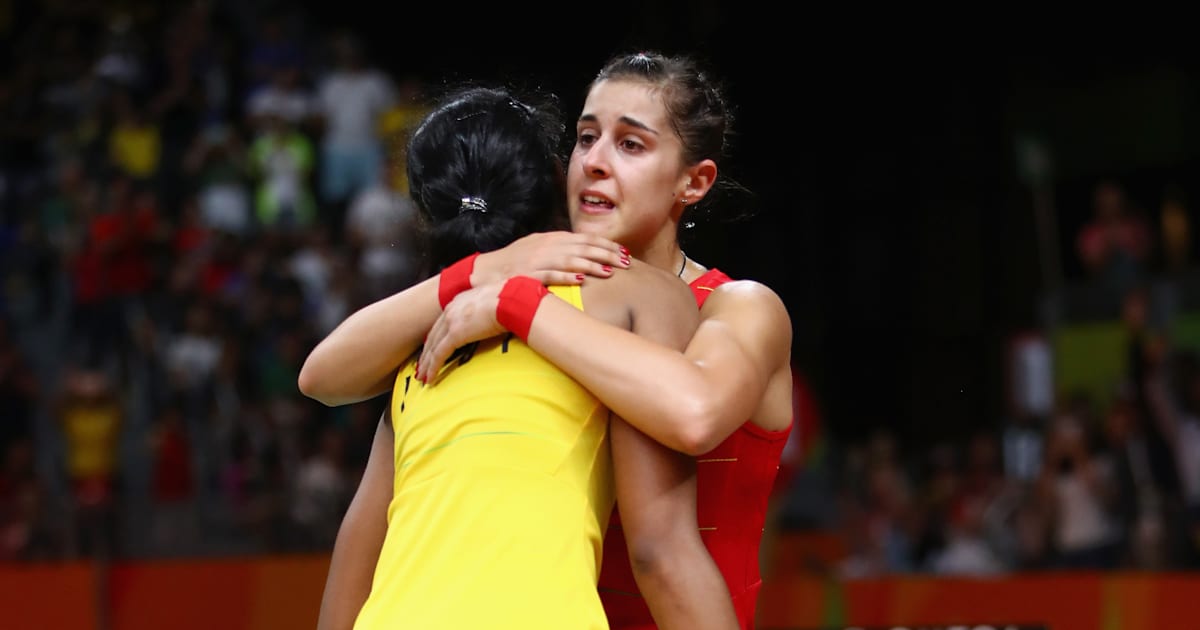 PV Sindhu and Carolina Marin are opposite sides of the same coin.

Sindhu is a tall, powerful, right-handed shuttler, who often cuts a calm picture on the court, not showing much emotion on winning or losing a point. And she is undoubtedly the biggest star of Indian badminton.

Marin, who stands marginally shorter than PV Sindhu, packs power in her shots with her favoured left-hand and is one of the most expressive players on a badminton court, screaming in delight after every point won. And Marin is Spain’s best badminton player in history.

The mirror reflections, and sheer badminton skills aside, the highest common factor between PV Sindhu and Carolina Marin is their intense desire to win.

And in that common quest, the two world champions have trained their mind and body to reach the peak of excellence.

The close head-to-head record underlines Sindhu and Marin’s fierce rivalry but they are also close friends, who respect each other as competitors.

“Marin and I are very good friends. On court, it’s completely different, of course, but off-court, we share a good relationship,” Sindhu told The Times of India.

“We have seen legends like Rafael Nadal and Roger Federer be very good friends. So it’s possible for rivals to be good friends off court, and I think that’s the friendship I share with Sindhu,” Marin said.

While they may be battling for supremacy now, the PV Sindhu vs Carolina Marin rivalry began 10 years ago, at junior level.

PV Sindhu gets the head start

Sindhu and Marin first faced each other at the 2010 BWF World Junior Championships in Mexico with the talented Indo-Spanish duo fighting it out for fifth place. Both had fallen in the quarter-finals.

It was a momentous triumph for the then 15-year-old PV Sindhu, as she prevailed over the elder Carolina Marin in straight games, winning 21-17, 21-19.

Sindhu and Marin then played each other in the third round of the Maldives International in 2011 and this time it was a much closer encounter.

PV Sindhu dominated the first game, but Carolina Marin used her experience to bounce back in the second. Unfazed, PV Sindhu then went on the offensive in the deciding game to chalk out a 21-7, 15-21, 21-13 victory.

Hat-trick of wins for Carolina Marin

However, Maldives was the last time Sindhu would taste victory against Marin for a while. They next faced off again in 2014 and Marin overpowering Sindhu in straight games at the Australian Open quarter-finals.

A few months later, the Spanish superstar repeated that performance in the BWF World Championships semi-finals, later going on to become world champion for the first time.

Carolina Marin then completed a hat-trick of wins against PV Sindhu in the semis of the 2015 Syed Modi international.

The Indian badminton star broke that losing streak in the 2015 Denmark Open semi-finals, stunning pre-match favourite Marin over three games but the latter soon got back to winning ways against Sindhu at the Hong Kong Open a month later.

Carolina Marin held the overall head-to-head record 4-3 at this point.

The next match-up is probably the most epic clash between the two – the Rio 2016 Olympics final.

The then twenty-year-old PV Sindhu, who had battled a stress fracture and pushed all limits to even get to the Games, had seen her senior and Olympic medallist compatriot Saina Nehwal knocked out before the quarter-finals.

Sindhu could have been forgiven for feeling intimidated. After all, it was the biggest stage of them all and though she was facing an old foe in Carolina Marin, the stakes were as high as they could be.

Moreover, Marin came into the clash as the title favourite – she had become world champion twice in the past two years, was ranked the best player in the world and had cruised into the final without dropping a game.

The Rio final was a toe-to-toe affair.

Sindhu took the lead in the first game at 20-19 with a swooping over-the-head winner and capitalised on that to wrap it up 21-19.

Carolina Marin knew she had a fight on her hands and bounced back with her trademark style of play in the second. The Spaniard predominantly used her strong forehand to rush Sindhu, proving equally adept at cross-court and down-the-line shots.

It kept Sindhu guessing and though the Indian managed to retrieve many, Marin had settled into a rhythm to win the game 21-12.

PV Sindhu vs Carolina Marin in the Olympics final was going down all the way to the wire.

The effect of the second game was felt in the third. Sindhu gave away a few easy points and Marin took a 9-5 lead. But Sindhu reeled off five consecutive points to level at 10-10. At this point, it was not going to be skills alone.

Carolina Marin did remarkably well to keep her composure as she went about slowly rebuilding the lead (16-14).

The Spaniard then shifted to top gear. Marin unleashed a barrage of powerful smashes to clinch a dream Olympic medal letting Sindhu win just one point in between. Carolina Marin won 19-21, 21-12, 21-15.

The world No. 1 shrieked in delight and fell to the floor, crying in celebration, having won the coveted Olympics gold to break the Asian domination and become the first European woman to win the grand title.

But for PV Sindhu it was a historic Olympics silver medal, the first Indian woman to win one and a first silver for Indian badminton.

“It means everything to me because it is my first Olympics and I am a silver medallist, so I think I am on cloud nine,” an emotional Sindhu said after the match.

“It was a fantastic game – Marin played brilliantly and I congratulate her.”

Sindhu and Marin faced off later in the year in the group stages of the Dubai World Superseries finals, where the Indian badminton star emerged a 21-17, 21-13 victor.

Since then, there have been four PV Sindhu vs Carolina Marin clashes, with Marin winning three, including the 2018 BWF World Championships final.

“Carolina has that speed and she is very aggressive,” Sindhu said after the final. “I think overall, she played much better. If I could have won the first game it could have been different… I can just say it was not my day.”

With both PV Sindhu and Carolina Marin still in the prime of their careers, the famous rivalry is surely going to script a few more dramatic chapters.

Could the next one be the Olympic final of Tokyo 2020?