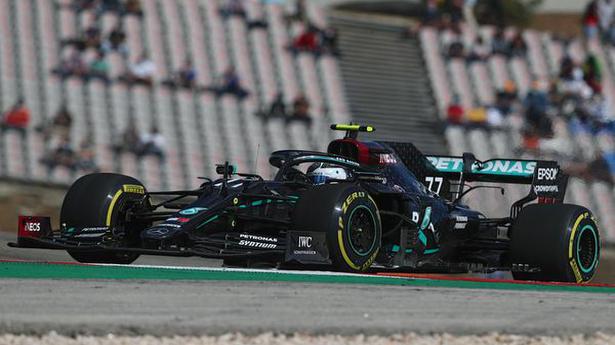 Max Verstappen and Lance Stroll collided in an eventful second practice for the first Portuguese Grand Prix in 24 years on Friday while Valtteri Bottas set the pace for Formula One champion Mercedes.

The afternoon saw two red flag interruptions, first when AlphaTauri’s Pierre Gasly pulled over with his car in flames and then when Red Bull’s Verstappen and Racing Point’s Stroll smashed into each other.

“I was so surprised that he just turned in while I was coming up to him. I don’t know where I had to go,” said the Dutchman, who refused to apologise for his language. “It was just very unnecessary.”

Racing Point boss Otmar Szafnauer saw it differently: “I can assure you 100% that Max knew Lance was there… but Lance doesn’t know Max was there. It’s pretty simple for me.”

Both drivers were summoned to stewards.

Verstappen still ended the day second fastest, half a second slower than Bottas, with Mercedes’ six-times World champion Lewis Hamilton second in the morning and then eighth after lunch. McLaren’s Lando Norris was third in the afternoon, ahead of Ferrari’s Charles Leclerc.

Bottas was quickest in both morning and afternoon, continuing a habit of leading the way on Fridays, with an overall best time of one minute 17.940 seconds around the undulating Algarve circuit near Portimao.

BackBenchers - December 2, 2020 0
Price: (as of - Details) The nivia cricket shoe comes in all sizes with an attractive design , the outer material is of...

The shops giving their staff Boxing Day off for once

Lose weight while gaining muscle with this simple yoga asana

India vs Australia 3rd ODI Live Cricket Streaming: When and where...

Tulsa Gym Owner Forced To Close Business Due To Pandemic

A good mix on the cards

Chess on the move

Chess: A global game gets snared in global problems

Women’s Pro Tour back on course

The quiet rise of captain Aaron Finch to upper echelon of...

Newcastle United’s Game With Aston Villa Under Threat Due To Coronavirus...

Thomas Bach runs unopposed as IOC president, will stay on until...

Australia vs India | Natarajan or Shardul could replace Saini as...