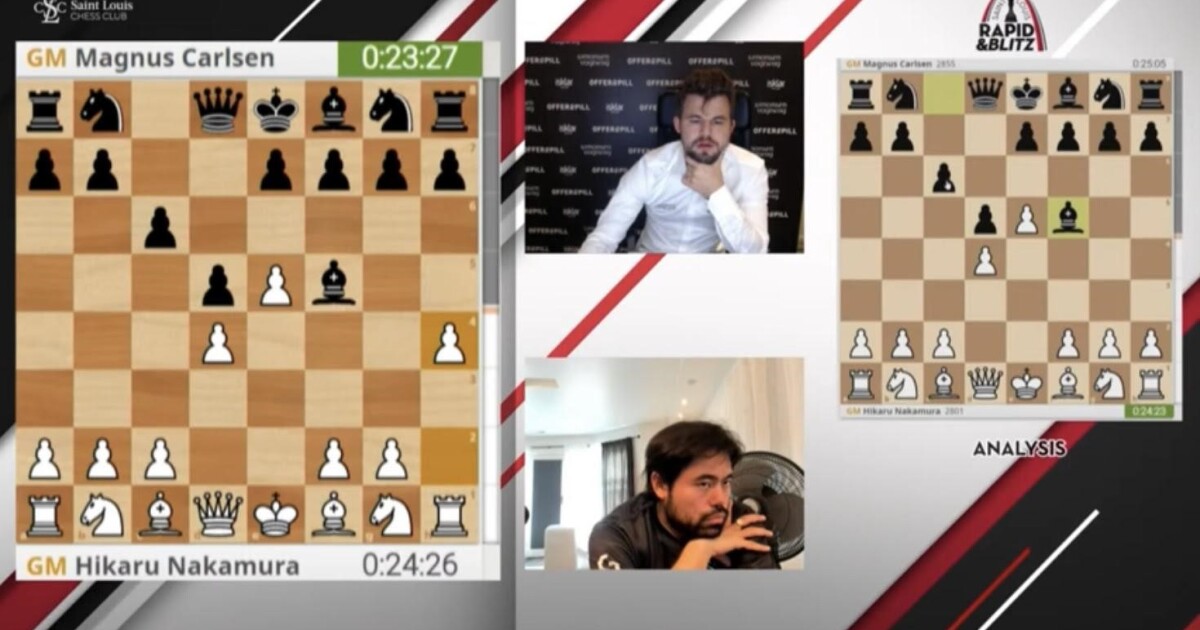 While nearly all over-the-board chess events have been cancelled or postponed, online chess has seen a resurgence in the face of the ongoing global pandemic. The St. Louis Chess Club hosted two online events that normally take place in-person: Champions Showdown: Chess9LX and the St. Louis Rapid and Blitz.

The first exciting week of chess kicked off with a twist; the style of play, known as Fischer Random or Chess960, is a popular chess variant invented by former World Champion Bobby Fischer. In Chess960, the pieces on the back rank are randomized, yielding 960 possible starting positions. This eliminates the memorization and deep opening preparation top Grandmasters have, leaving them to figure it out in the moment. Chess9LX was a 10-player round robin, which means everyone played each other once. Each round had a brand-new starting position.

The tournament featured one of the most highly anticipated events of the past decade: the face-off between legendary World Champion Garry Kasparov and reigning World Champion Magnus Carlsen. The two had not met over the board in an official event since their only previous encounter, in Reykjavik in 2004.

After the drawing of lots, the two world champions were scheduled to square off in the second round — this time thousands of miles away in the digital world. While the Norwegian dominates the chess world, winning one tournament after another, Kasparov has only played in two official chess events since his retirement in 2005, both in St. Louis, and now calls himself an amateur. It was a tense battle, as one would expect, ultimately ending in a draw after one careless move by Carlsen.

Chess9LX became a race for first place among Carlsen, Levon Aronian and Hikaru Nakamura. Aronian was ranked No. 2 in the world for a long time and was considered to be the main man to challenge Carlsen’s claim as world champion. Nakamura and Carlsen, too, have a long rivalry, which reached its peak this summer during the Magnus Carlsen Invitational. In that chess event, the two grandmasters reached the finals and played 7 mini-matches, the maximum number possible, for the tour title. Carlsen won the title in an Armageddon game. Their summer rivalry was reignited during Chess9LX, as they were in a tight battle for first place until the last minute. Ultimately, the tournament ended with two joint winners: Carlsen and Nakamura, with each player taking home $31,250.

After a one-day break, action continued with the St. Louis Rapid and Blitz. Since its inception, the St. Louis Rapid and Blitz has been a stop on the Grand Chess Tour, but it took place as a standalone online tournament this year due to the cancellation of the 2020 Grand Chess Tour. This year’s event featured nine rapid and 18 blitz games over five days and a $250,000 prize fund — $100,000 more than in 2019. This fast-paced event featured some of the top players in the world, as well as the two youngest 2700-rated players: Jeffery Xiong and Alireza Firouzja.

It came as no surprise that Carlsen’s name was etched on another winner’s trophy. This time, he was joined by the American Wesley So, the current Fischer Random World Champion. Carlsen was on top of the leaderboard throughout the event, but So’s perfect score in the last three games secured him a tie for first. The co-winners each collected $45,000. Nakamura finished three points behind the winners in third place, bagging $35,000.

October 2020 will mark an extraordinary chapter in American chess history; due to the COVID-19 pandemic, the St. Louis Chess Club will host the 2020 U.S. Chess Championships online for the first time. This unique combination of the five top national tournaments will showcase competitors who best represent the past, present and future of American chess. The action will begin with the U.S. Girls’ Junior Championship on Oct. 9, followed by the U.S. Junior, U.S. Senior, U.S. Women’s and U.S. Chess Championships, and feature a combined prize fund of $330,900.

Fans can watch daily coverage with GMs Alejandro Ramirez, Maurice Ashely and Yasser Seirawan along with WGM Jennifer Shahade starting at 12:50 p.m. CDT on Oct. 9 at uschesschamps.com or on the St. Louis Chess Club’s YouTube and Twitch.tv channels.

BackBenchers - February 27, 2021 0
World No.3 Germany side thrashed world No.9 Indian women’s hockey team 5-0 in the first match of the four-match series on Saturday.Pia Maertens...