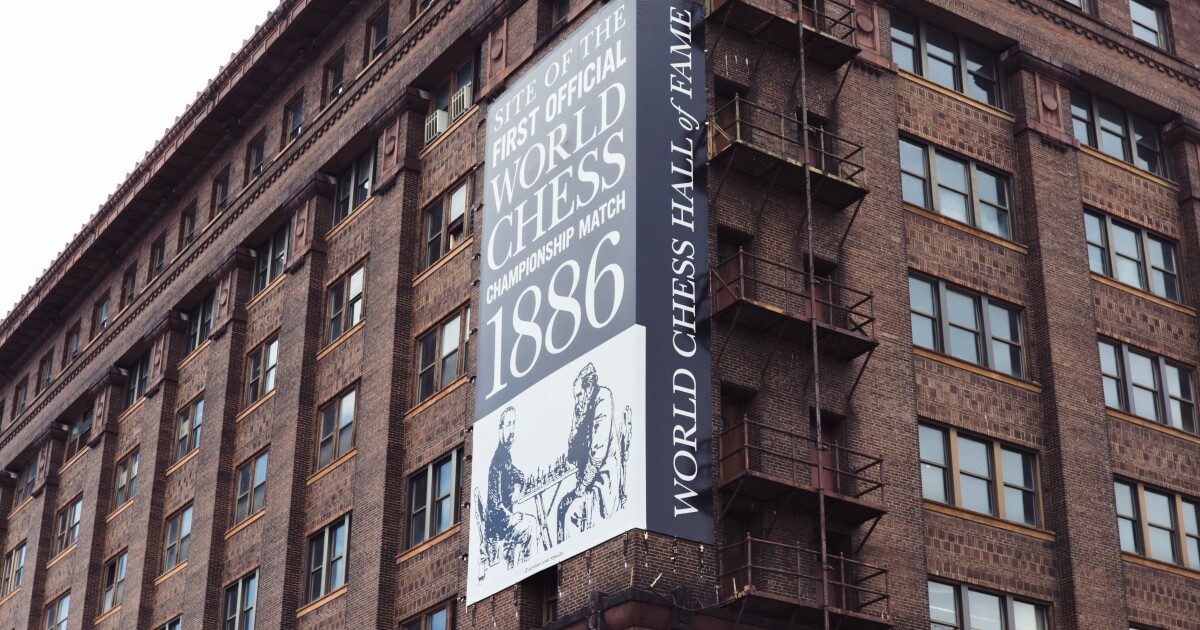 On August 9, 2018, 132 years after the first World Chess Championship, the World Chess Hall of Fame unveiled a commemorative banner for the site of games six through nine held in St. Louis. The banner was displayed on the Butler Brothers Building on the corner of 18th and Olive Street and presented by 2018 World Chess Champion Challenger Fabiano Caruana and two U.S. Chess Hall of Fame inductees, Maurice Ashley and Yasser Seirawan. Chess has been an integral part of St. Louis’s history for much longer than many people know.

St. Louis was selected as the second stop because it was just as much a thriving capital for chess in 1886 as today, thanks to Max Judd, who was inducted into the U.S. Chess Hall of Fame in 2019. In the late 1800s, Judd was one of the country’s top chess players and placed St. Louis on the map for chess. According to an article from The Missouri Republican, the games in St. Louis would be “cabled to all parts of the globe,” advertising St. Louis as a chess destination. The St. Louis Chess, Checker, and Whist Club, founded by Judd, sponsored the St. Louis games in 1886 at Harmonie Hall. The grand hall was designed for the Harmonie Club by St. Louis architectural icon Isaac S. Taylor in 1883. According to the St. Louis Post-Dispatch, the building was equipped with club rooms, private dining rooms, billiards, two bowling alleys, and featured “the largest private hall in the city.” The hall could hold 600 people, making it large enough to hold spectators for the match. The building itself was designed in the American Renaissance style, described as being decorated with “richly ornamented walls and ceilings.” The lavish decor included French mirrors, Turkish sofas and richly carved Mexican mahogany furniture. With such a luxurious building, the Harmonie Social Club was able to host events in its many rooms, including an annual ball for club members only. The spectacle of the Harmonie Club was an opulent setting for the historic match. Unfortunately, 20 years later, Harmonie Hall was demolished and replaced with The Butler Brothers Building in 1906.

The history of chess in St. Louis spans more than a century. The city has had notable chess events throughout its history. Chess legends have come from all over the world to St. Louis and have competed here ever since. The St. Louis chess legacy continues with chess grandmasters who live and play here, helping to grow the community at St. Louis Chess Club and the World Chess Hall of Fame.

Brittany Jasin is an artist based in St. Louis. She currently works as a gallery attendant at the World Chess Hall of Fame. Jasin assists with daily operations as well as installation and research projects with the museum staff.

Don’t need a celebrity to popularise a sport: Abhishek Bachchan on...

BackBenchers - November 25, 2020 0
Amazon Prime Video and Abhishek Bachchan, on Tuesday, unveiled the trailer of Sons of the Soil: Jaipur Pink Panthers, during a virtual press...

After ISL, time for Masters badminton in Goa | Goa News...

Mohamed Salah To Return For Liverpool In Champions League Clash Against...

A fan’s travelogue & a historian’s clarifications

Mumbai winter races to begin at Pune from Nov. 27

John Ross Glover: From the Basketball Court to the Courtroom –...

A refreshing Dominic Thiem for the tennis world

India vs Australia: Adelaide Test to go ahead as planned, confirms...

Abhishek Bachchan unveils the trailer of ‘Sons Of The Soil’ 1st...

‘I Will Finish All The 2021 Tournaments First And Then Will...

Don’t need a celebrity to popularise a sport: Abhishek Bachchan on...