As he was top seed in this tournament, Nihal’s win wasn’t a surprise. He did score bigger than expected as he seemed to be in absolute top form against his four years older opponent from Russia. Whereas SmarterChess had given a 63 percent winning probability to the Indian teenager, only a 14-12 score was suggested.

Sarana (@mishanick) could still keep the pace at the start. Only after he lost the last five-minute game, the margin became two points (5-3). After that, the Nihal express started rolling: a 6-2 win in the three-minute portion and a 7-2 win in the bullet.

The players had exchanged wins when the 16-year-old Indian grandmaster (@nihalsarin) showed excellent technique in an opposite-colored bishop ending while having just a few seconds on the clock.

Instead of technique, perhaps it was more a matter of hypnosis because both commentator GM Robert Hess and Sarana both thought Black was getting into a zugzwang (where he wasn’t).

After a draw in the first three-minute game, Nihal extended his lead to three points. That was a big moment in the match as Sarana could have limited the damage if he hadn’t missed a checkmate in the next game:

The best moment of the match and maybe in the championship as a whole came in game 24. It was one game before the end and Nihal had already secured victory long before when he found the following, brilliant mate:

Asked about the secret behind his wizardry, Nihal replied: “I think it’s just by playing a lot of bullet. Especially, I’ve played quite a lot of 10+1.”

In case you are wondering, that is 10 seconds plus a one-second increment.

Having qualified for the Speed Chess Championship Knockout Final, Nihal said he doesn’t have a favorite top GM he would like to face there. His humble reply: “I’m clearly going to be the weakest and it will be great to play anyone.”

The live broadcast of the match with GM Robert Hess and GM Daniel Naroditsky. 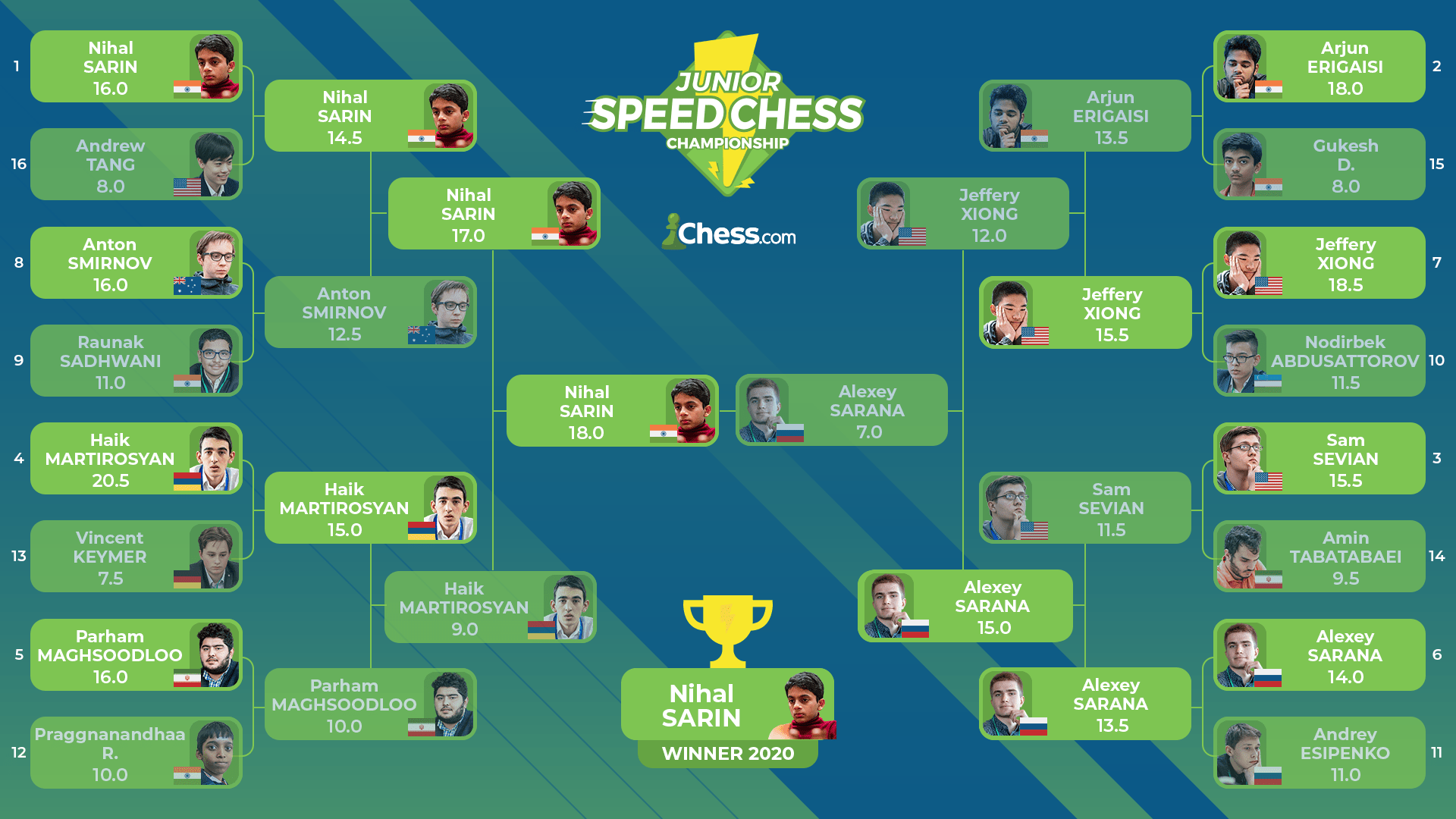 The 2020 Chess.com Junior Speed Chess Championships was sponsored by ChessKid, the world’s number-one site for kids to learn and play chess. Sixteen GMs younger than 21 years old played in a knockout format with 90 minutes of 5|1 blitz, 60 minutes of 3|1 blitz, and 30 minutes of 1|1 bullet chess. In this second edition, there was a total prize fund of $25,000 on the line. Find all information here.

That was fun. #Akshayakalpa

In his tweet after the match, Nihal mentioned his sponsor Akshayakalpa, a producer of organic milk products in India.