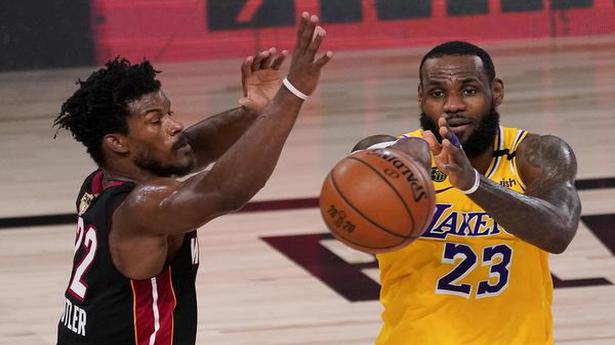 Los Angeles Lakers can complete the franchise’s return to the pinnacle of basketball here as it looks to seal a record-equalling 17th NBA Finals crown with a victory over Miami Heat.

Lakers, which returned to the Finals this season after missing the post-season for six consecutive years, took a commanding 3-1 lead in the best-of-seven series on Tuesday, leaving Miami needing to stage a miracle to keep its hopes alive.

Only one team — LeBron James-led Cleveland Cavaliers in 2016 — has ever come back from a 3-1 Finals deficit to win the title. The odds, and momentum, are stacked firmly against Miami.

Heat coach Erik Spoelstra struck a defiant tone on Thursday, insisting that the series remained competitive despite the improbable task facing his men.

Injuries to Goran Dragic and Bam Adebayo in game one robbed Miami of two key figures for games two and three. While Adebayo returned for Tuesday’s game-four loss, Dragic remains sidelined by a foot injury and is rated as “doubtful” to feature on Friday.

Miami will look to the inspirational Jimmy Butler to lead the fightback. Butler was superb in the Heat’s sole victory of the series in game three, scoring 40 points in a virtuoso performance.

“Ain’t nobody thinking about going home over here,” Butler said Thursday. “It’s not win or go home — it’s win or win. That’s how we think about it.”

After being given a bloody nose in game three, the Lakers adjusted superbly in game four, neutralising the threat of Butler by deploying Anthony Davis to shadow the Miami small forward.

Davis, who has formed a dominant axis alongside James since joining Lakers in 2019, is chasing a first NBA championship.

Lakers will attempt to close the deal wearing their “Black Mamba” uniforms, a tribute to franchise icon Kobe Bryant, who died in a helicopter crash in January. So far, Lakers are undefeated when they have worn the striking all-black strip.