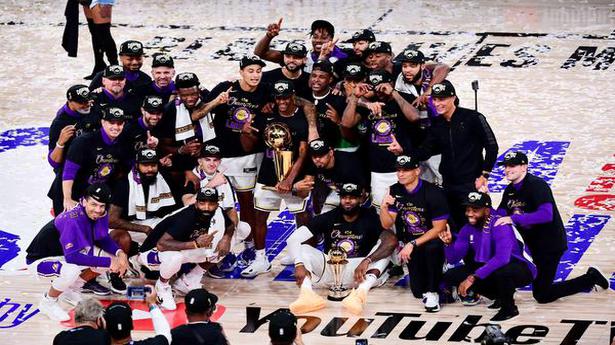 Los Angeles Lakers, fuelled by superstar LeBron James’ triple-double, dominated Miami Heat 106-93 on Sunday to win its 17th NBA championship. It’s first in a decade pulled Lakers level with the Boston Celtics for the most number of crowns.

James added another chapter to an epic career, delivering 28 points, 14 rebounds and 10 assists as he captured his fourth NBA title with a third team.

He earned NBA Finals Most Valuable Player honours for a fourth time, and said the accomplishment had a special flavour with the Lakers.

Anthony Davis, playing in his first title series after years of frustration in New Orleans, added 19 points and 15 rebounds as the Lakers completed a 4-2 triumph more than eight months after the helicopter crash that killed team legend Kobe Bryant, who had led the Lakers to their last title in 2010.

The Lakers out-hustled, out-muscled and out-played Miami, making sure it wouldn’t come down to any last-gasp effort as it did when Los Angeles were denied in game five on Friday.

The Lakers had taken hold of Game 6 by half-time, their 36 second-quarter points equalling Heat’s entire first half total.

The Lakers took a 64-36 lead into the break with four players already scoring in double figures.

Heat, which had stunned the Lakers on Friday on the back of Jimmy Butler’s gritty triple-double, couldn’t produce another miracle.

Bam Adebayo led Heat with 25 points and 10 rebounds and Butler and Jae Crowder added 12 apiece, but Miami simply had no answer for the knockout blow Los Angeles delivered in the first half.

James played his 260th playoff game, surpassing Derek Fisher for the most all time. James said one of the great satisfactions of the victory was helping Davis gain a title.