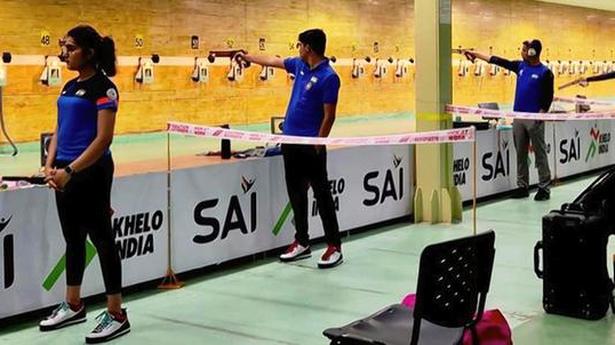 The National camp for the Olympic core group shooters started at the Dr. Karni Singh Range, Tughlakabad, on Thursday, after stringent adherence to safety protocols.

The shooters, coaches and other support staff had been tested for COVID-19 when they reported for the camp, and quarantined in a hotel for a week, before a second test cleared them for training at the range.

“We did zoom sessions for fitness training during the quarantine period,” said Deepali Deshpande, the high performance coach for rifle.

Meanwhile, the high performance coach for pistol, Delhi-based Samaresh Jung said that he had finished the formalities of home isolation and testing, and would be joining training on Friday.

Most of the shooters reported for the camp.

There were rare exceptions like Asian skeet champion Angad Vir Singh Bajwa who continues to train at his home range in Chandigarh, as he has to take care of his grandparents.

In the absence of national coach Ennio Falco, who trains the skeet shooters, Angad said that he was following the guidance of his coach Tore Brovold for training routine at home.

For the other Olympic quota holder in skeet, Mairaj Ahmad Khan, nothing much has changed as he has been training at the range, ever since it opened for training, long before the camp.

“I hope Falco joins soon,” said Mairaj, who also got tested so as to follow the protocol.

“For me, nothing much has changed, as I have been regularly training at the range,” said Mairaj.

Saurabh Chaudhary and Manu Bhaker also had their home quarantine before joining the camp, as there was an option for those living in Delhi NCR to be in “home isolation”.

There will be a break for a week for Deepavali, before the shooters assemble once again for training and continue till December 17.

BackBenchers - March 6, 2021 0
Elite boxing trainer Eddy Reynoso is offering a helping hand to Conor McGregor. McGregor is the biggest star in MMA. He holds records for...