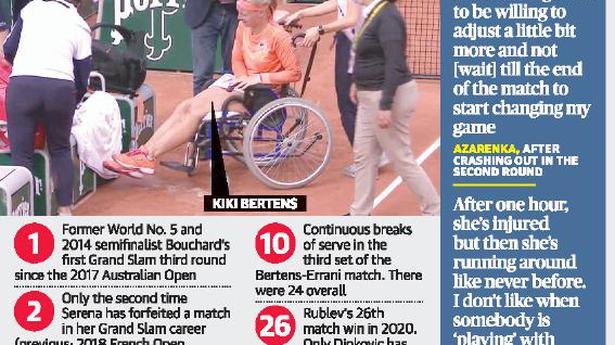 Rafael Nadal continued his quest for a record-extending 13th French Open title with a 6-1, 6-0, 6-3 crushing of American Mackenzie McDonald to advance into the third round here on Wednesday.

World No. 3 and US Open champion Dominic Thiem survived a third set wobble and had to save three set points before overcoming American Jack Sock 6-1, 6-3, 7-6(6).

Fifth seed Kiki Bertens narrowly avoided joining the exodus of favourites as she survived a match-point and cramps against former runner-up Sara Errani before hobbling into the third round.

Bertens eventually won 7-6(5), 3-6, 9-7 in a duel lasting more than three hours but she left the court in a wheelchair after struggling physically in the final set.

The 28-year-old said she had suffered a full-body cramp when she got back to her chair after the match and needed 45 minutes of treatment in the locker room.