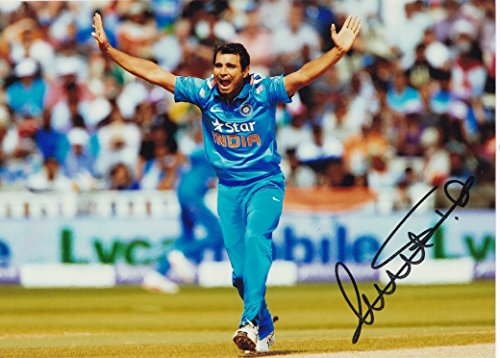 An Indian international cricketer Mohammed Shami represents Bengal in domestic cricket. He is a right-arm fast-medium swing and seam bowler, who bowls consistently around the 85 mph (140km/h) mark, which makes him a deceptively potent fast bowler. He is also known as a reverse swing specialist. He made his ODI debut against Pakistan in January 2013 where he bowled a record four maiden overs. He picked a five-wicket haul on his Test debut against West Indies in November 2013. This rare product carries within itself the coveted autograph of this famous sports personality.
Having been signed by Kolkata Knight Riders (KKR) for the 2011 season of the Indian Premier League, this signed memorabilia will be a delight for any fan who wants to celebrate the charisma and phenomenon named Mohammed Shami.
This one of a kind signed photograph has been curated by the seller and has very limited availability. Make one yours today.