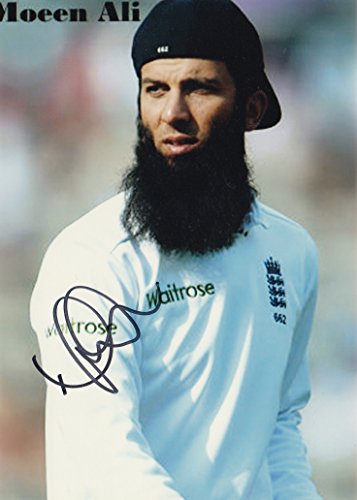 An English international cricketer Moeen Munir Ali is a batting all-rounder, a left-handed batsman and right-arm off-spinner, who played county cricket for Warwickshire before moving to Worcestershire after the 2006 season. As of 2017, Ali represents England in all formats of the game. He won Warwickshire’s NBC Denis Compton Award in both 2004 and 2005 and Worcestershire’s NBC Denis Compton Award in 2009. His off-spin is marked by a strongly spun off-break and a well-concealed arm ball. This rare product carries within itself the coveted autograph of this famous sports personality.
Having been signed for Warwickshire aged just 15 and hitting a half-century for the county’s Second XI a few days before his 16th birthday, this signed memorabilia will be a delight for any fan who wants to celebrate the charisma and phenomenon named Moeen Munir Ali.
This one of a kind signed photograph has been curated by the seller and has very limited availability. Make one yours today.