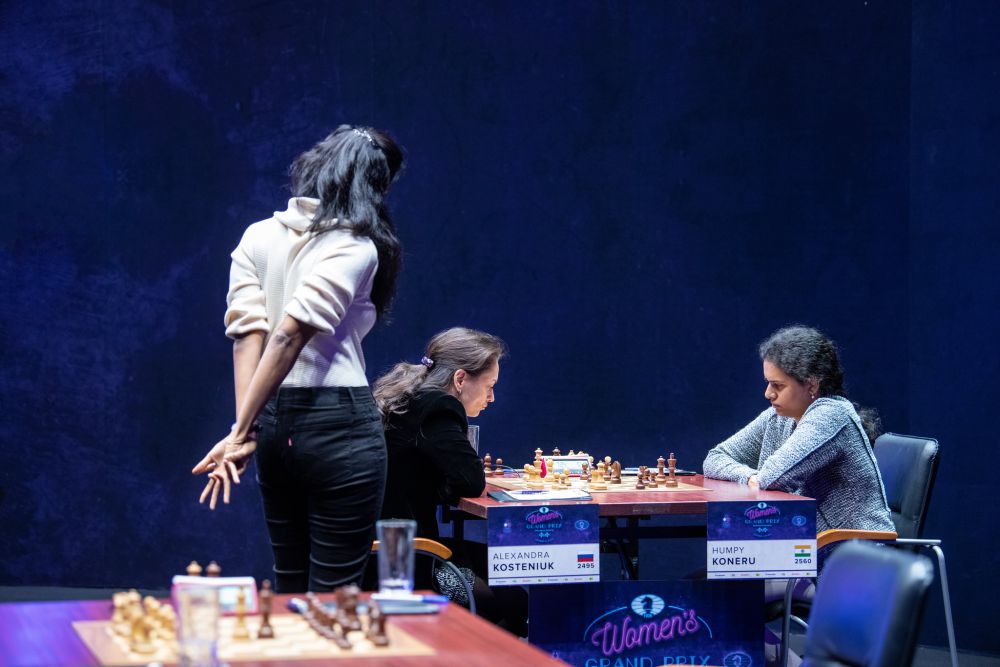 
10/5/2020 – Mint, one of India’s premium business news publications, just published an article written by Omkar Khandekar focused on the rating gap between the top men and women chess players. The author wonders whether it has to do with conventional gender roles or unequal access. | Pictured: Harika Dronavalli observes her compatriot Humpy Koneru in action against Alexandra Kosteniuk | Photo: FIDE

When she first started participating in chess tournaments at age 7, Koneru Humpy would play in both draws—of boys and girls. “They considered girls as ‘underdog players’, so I was allowed to participate,” she recalls. “But mostly girls themselves didn’t dare do that because the competition (in the boys’ draw) was very tough.”

Improve your chess with Tania Sachdev

On this DVD, well-known Indian WGM Tania Sachdev shows you how to evaluate certain positions and then find the right concepts and plans on the basis of her own games.

Humpy was no underdog. In 1999 and 2000, she won the Asian under-12 and national under-14 titles at ages 12 and 13, respectively, both in the boys’ category. Her performance against girls was even better: She swept up the top prize at the under 10, 12, 14 and 20 world championships. At the age of 15, she became a chess grandmaster (GM), the youngest woman in the world at the time to enter the elite club. She even broke the record of Judit Polgár, the highest rated woman chess player ever—she was three months younger than Polgár was when she became a GM.

Some couldn’t digest her meteoric rise. Humpy recalls an instance from 2003, when her automatic selection for the top-level Men’s National A tournament met with disapproval from some of her male peers. “They didn’t think I deserved it. They said I didn’t have the strength to play the higher event.” To prove herself, she entered the men’s draw in the qualifiers’ tournament. She finished second.

There are no men’s tournaments any more. These have been expanded to “open” contests where players are chosen on the basis of their rating points, or “ELOs”. Over the years though, Humpy’s success rate at such tournaments started dipping. Today, at age 33, she is the world No.2 in women’s chess but No.283 overall. The No.1 in women’s chess, Hou Yifan, is world No.86 overall.

The sharp gender divide among the best—a phenomenon with a historical precedent—has often had people scratching their heads: If chess is a sport of the mind, why don’t women match up to men?

Some of the answers are obvious. Professional chess is mostly a boys’ club. Only 15% of all the licensed players in the world are women, according to the International Chess Federation, or FIDE. India is no different: Its 13,365 women chess players make up 16% of the total registered, according to the All India Chess Federation (AICF). Fewer participants at the entry level results in fewer chances for the top slots. But Humpy has a different theory, a more controversial one: Men are just better players. “It’s proven,” she says. “You have to accept it.”

Read the full article at LiveMint

This DVD allows you to learn from the example of one of the best players in the history of chess and from the explanations of the authors how to successfully organise your games strategically, consequently how to keep your opponent permanently under press