Home OTHER SPORTS Meet boxing trainer Mujtaba Kamal who wants to put India in the... 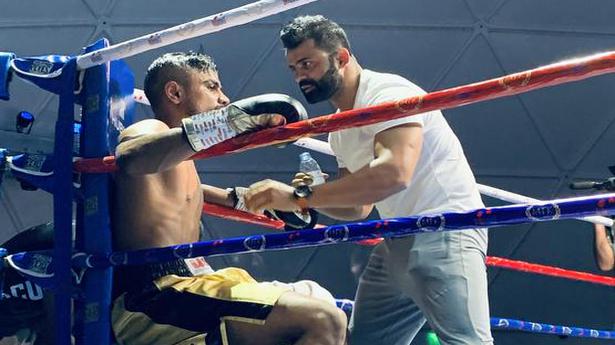 “I don’t count the sit-ups. I only start counting when it starts hurting because they’re the only ones that count. That’s what makes you a champion.”

This famous Muhammad Ali quote paints pain as a virtue. It’s true perhaps for boxers. In a sport of throwing punches, you probably sign up to be friends with pain. While pain might have the power to transform a person, it doesn’t necessarily get them what they wish for. Mujtaba Kamal knows this well.

Mujtaba, 36, is a celebrity boxing trainer based in Bengaluru. He’s taught Shahid Kapoor, Sonakshi Sinha among others. He’s a coach at the fitness chain Cult.fit. Boxing is his profession and passion. Of the latter, he says, “My main goal is to groom young talent, who can make a mark in the world of professional boxing.”

Mujtaba uses social media and his network of boxers to scout for young talent. He knows some of the big names of Indian boxing like Vijender Singh and Akhil Kumar. “I send some 100 or 200 pairs of boxing gloves to the people I know. I ask them to give it to young boxing talents they know and send me videos of them boxing. If they are talented, I start mentoring them.” Sanjay Thapa, 22, moved from Nepal to India to train under Mujtaba. Thapa is now 6-0 in his pro boxing career.

Mujtaba, who’s from Kolkata, used to be a young talent too. He’d won 11 national boxing medals. Sometime in the mid-2000s, he decided to be a professional boxer. India hardly has a platform for pro boxing. The situation was worse a decade ago. So, he went to Hong Kong in 2007 to build his career. Mujtaba hardly knew anyone there. As he trained and sought a promoter, he met his expenses by working as a delivery boy and a waiter. After five years of perseverance, he got a professional bout. It broke his jaw and spirit and changed his life.

“I was left with nothing after that bout. I was alone on a flight back to Kolkata. After returning, I couldn’t eat anything for a month. I lost 10 kilos.”

Mujtaba’s struggles did not yield success. Lack of guidance, he felt, was the main reason for that. So, he decided to be a fitness boxing trainer, which would give him the means to find and groom young talent.

Professional boxing is still nascent in India. Vijender Singh, apart, there are no well-known names here. “The problem is people look down on pro boxing. But you look at all the all-time great boxers — they all turned pro at a very young age. The battles are intense in pro boxing. It prepares you well for the Olympics. I am pretty sure that one of my trainees will be at the 2024 Olympics.”