Breathe in. Breathe out. Those two little phrases are most synonymous with the practice of yoga, an ancient Indian tradition that in the modern era is normally used for relaxation and stress-relief, among a range of other wellness practices.

In recent years, laughter yoga has been gaining increasing popularity, less for its physical practice than for its ability to heal depression, anxiety and feelings of being overwhelmed, among other issues.

Most classes start off with some breathing exercises, which is followed by a series of exercises that start off using forced laughter, artificial at the beginning but which turns into real laughter and fun with the passage of time.

Modern science has proven that the human body does not differentiate between real and artificial laughter. In fact, it is well known that the body reaps all the benefits of laughter, whether instigated by actual humour or through simply laughing for no reason.

Modern science has also proven that laughter for no reason brings happiness and improves the state of the nervous system. Manal Al Attar, one of the few certified laughter yoga instructors in Egypt, sat down with Daily News Egypt to describe how the story began and why it is important.

What is Laughter Yoga?

It is a set of special exercises for breathing with some laughter exercises, practiced in a way that when we laugh, it gradually turns into a burst of natural laughter. This is because the body cannot differentiate between forced and real laughter. The body still gets all the benefits of laughter in both cases.

When did Laughter Yoga start?

It started about 20 years ago, at the hands of Madan Kataria and his wife Madurai, in addition to some of their friends in a public park in Mumbai, India. It then spread to more than 106 countries worldwide, and there are thousands of laughter yoga clubs in the world.

Who brought it to Egypt?

It was Ute Devika, a German who has lived in Egypt for 10 years, who brought it here.

How did your relationship with Laughter Yoga begin?

Several years ago, I was diagnosed with cancer, and during treatment I attended Laughter Yoga with Maryam Emara who is the first Egyptian trainer in Laughter Yoga. I felt a big difference, and found an improvement in my physical and psychological condition when I was attending yoga sessions before conducting tests and taking treatments. I realised the extent of its effects on raising the body’s immunity and improving the mood, so I decided to study it. Indeed, five years ago, I undertook the training course with Ute Devika, and then I worked as a certified trainer in Egypt.

Of course not, we all need to laugh because it is the simplest way to ensure we are able to face daily stresses and look positively at things, but cancer and depression patients are the most common categories that may need Laughter Yoga. 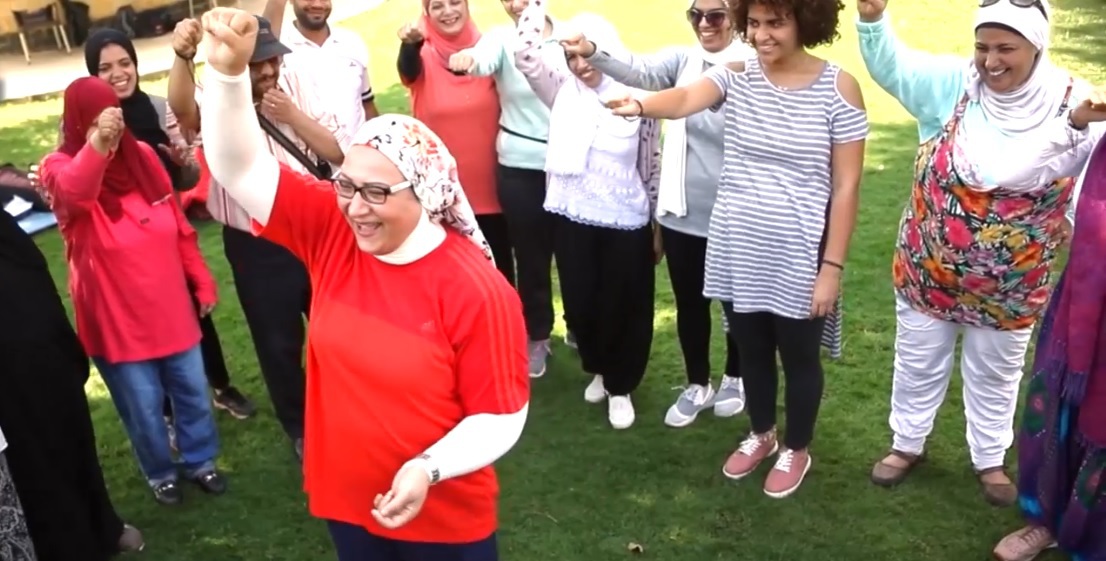 How does a cancer patient benefit?

During laughter yoga sessions, we do some deep breathing exercises for a certain time of not less than 15 to 20 minutes. These affect the physiology of the body, as well as the human psychological and health conditions. This in turn helps us get rid of carbon dioxide and bring in a large amount of oxygen to the body. It has been found that the more oxygen the body gets, the greater its ability to fight cancer, which leads to an increase in the efficiency of the body’s immune system.

How can a depressed patient benefit from Laughter Yoga?

Laughter yoga helps in the secretion of happiness hormones, such as endorphins, dopamine, and serotonin. As a result, people feel happy, whatever the circumstances, and many depressed patients were cured through the sessions.

Why did you travel to India?

I went to India to delve deeper into the study of Laughter Yoga, and to work to spread awareness of its importance due to its tremendous health benefits for everyone, especially for patients with breast cancer. Because I believe that laughter yoga is a valuable message, I went to Bangalore and became one of the first certified Egyptian teachers of Laughter Yoga.

Japan PM vows to press ahead with Olympics amid virus surge