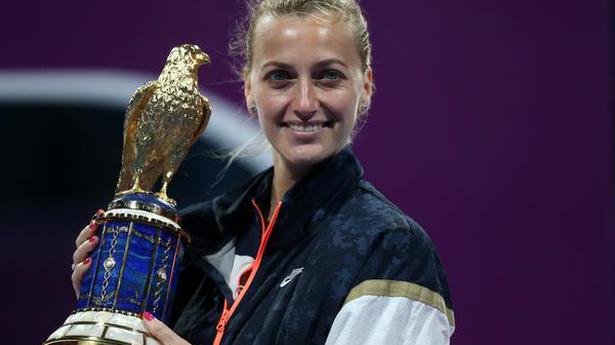 The fourth-seeded Czech needed just over an hour to see off her fellow two-time Grand Slam winner.

It was Kvitova’s 28th career title from 38 finals played.

“It’s been a great run — tough conditions,” said Kvitova after her victory. It followed her Doha title of 2018, which also came at the expense of Muguruza.

“I’m sorry for the second time, I hope we can meet somewhere else,” she added, nodding towards her vanquished rival.

Kvitova has won 20 career matches in Doha, the most of any player, passing Svetlana Kuznetsova and Caroline Wozniacki on 19.

Muguruza said that “every day is a new match, congrats to Petra with all the conditions — and for a second time she took the title away from me”.

“I can’t wait to come back next year,” added the Spaniard who has lost five times in a row to Kvitova.

Muguruza had the benefit of a full rest day on Friday as her semi-final opponent Victoria Azarenka withdrew due to a back injury giving her a walkover into the final.

She has, however, had to contend with remote coaching after Conchita Martinez tested positive for coronavirus on arrival in Doha and has been undertaking her duties by Zoom.

Kvitova clearly relished the chance of another Qatar Open title, the third time she has contested the tournament, saying afterwards that “it feels like home a little bit”.

Kvitova fell behind in the third game, succumbing to a testing drop shot.

Muguruza followed that with several unforced errors in her service game allowing Kvitova to briefly go ahead.

Kvitova maintained her momentum, going up 5-2 and reaching set point within 35 minutes.

Muguruza came out fighting in the second set, winning the first game — but it didn’t last.

Kvitova let out her trademark shriek when she went up to break point in the third game of the second to Muguruza’s visible frustration, and again when she took advantage.

That put the Czech 2-1 up at a critical point as the wind intensified.

Kvitova had to wait for her third break point of the sixth game of the second set to claim another edge.

A double fault on her first championship point did delay the inevitable but Kvitova patiently waited for her week’s work to be rewarded.