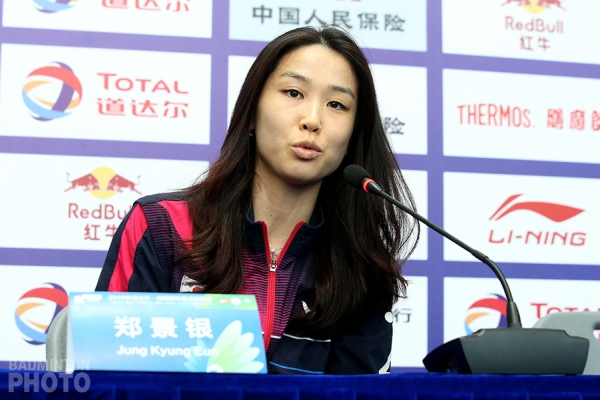 A week after Jung Kyung Eun posted a petition to the Cheong Wa Dae website, the doubles player appeared in a press conference with Korean National Assembly member Jeon Yonggi.

Assembly member Jeon referred to Jung Kyung Eun as a “highly skilled veteran” whose bronze medal performance at the Rio Olympics in women’s doubles, made her an “valuable asset for the badminton community to keep”.  He then yielded the floor to Jung Kyung Eun, who read in full the text of the petition she had posted to the Cheong Wa Dae website (see related article for more details).

After Jung had finished, to illustrate one of the important points in her argument, Mr. Jeon held up a table showing the scores out of 50, given by the screening committe to the top 12 women’s doubles candidates during the national team tryout process.  The table showed that the top 5 players received scores ranging from 47.75 to 49.25, while not one player ranked 6th or below received a score above 21 out of 50!  Jeon opined that it was hard not to suspect that the scores were assigned to justify selections that had already been decided upon.  (The full list can be seen here, published by Sunday News)

Earlier in the day, Sports Seoul had reported that Korea’s newly established Sports Ethics Center was already investigating the issue, after Jung Kyung Eun had filed a complaint with the body on January 29th.  National Assembly member Jeon mentioned this investigation and also urged the Korean Olympic Committee and the Ministry of Culture, Sports and Tourism to take an interest.  Jeon promised to see the matter through and to hold responsible persons to account if it comes to light that there was any wrongdoing in the athlete selection process.

A day before the press conference at the National Assembly, the Badminton Korea Association (BKA) held its first annual meeting since the election of its new President Kim Taek Gyu.  On Friday, the Yonhap New Agency reported that Kim had said he intended to revamp the national team selection process.

Don Hearn is an Editor and Correspondent who hails from a badminton-loving town in rural Canada. He joined the Badzine team in 2006 to provide coverage of the Korean badminton scene and is committed to helping Badzine to promote badminton to the place it deserves as a global sport. Contact him at: don @ badzine.net