Home Cricket IPL 2020 | Saha, Warner deflate Capitals before Rashid has them in... 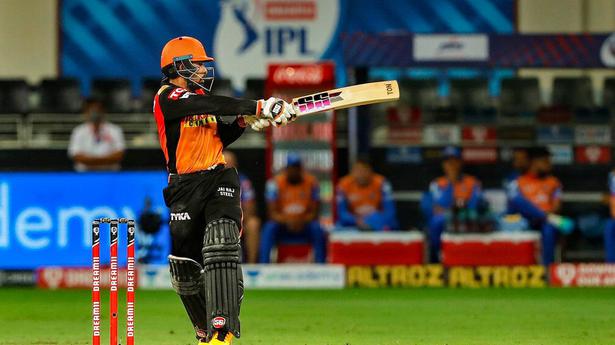 Chasing a target of 220 is never easy but Delhi Capitals lacked intent and eventually faltered against Sunrisers Hyderabad at the Dubai International Stadium on Tuesday.

SRH beat DC by 88 runs to stay alive in the tournament.

Leading from the front

David Warner led from the front, scoring a 34-ball 66 (8×4, 2×6) and then taking two catches to help dismiss the in-form Shikhar Dhawan — for a golden duck off Sandeep Sharma’s third ball — and Marcus Stoinis, off Shahbaz Nadeem, inside the PowerPlay.

Ajinkya Rahane (26, 19b, 3×4, 1×6) had tried to build a partnership with Shimron Hetmyer in the chase, but that was cut short by leg-spinner Rashid Khan, who dismissed them both.

Rashid’s three for seven strangled DC. He bowled 17 dot balls to finish with an economy-rate of 1.75.

Speeding to 77 in the first six overs without losing a wicket, SRH recorded its best PowerPlay performance of the season, with Warner taking on fast-bowler Kagiso Rabada to score 22 in an over.

The southpaw smashed four fours and a six to completely change the momentum. The signature slash cut, the swipe over cow corner and the familiar flat-batted strikes left the Delhi fielders clueless.

Saha — playing his second game of the season — swept the spinners and pulled the quicks with gusto.

Warner and Saha added 107 runs off 58 balls before R. Ashwin sent down a loopy off-break to entice the left-hander; the mistimed lofted shot found extra cover.

Saha looked set for his second IPL hundred, but he mistimed a length ball from Anrich Nortje to be caught at mid-off. Ashwin and Nortje were the only DC bowlers among the wickets.

With this huge win, SRH has moved to sixth on the table. Its net run rate (0.396) is the best of the chasing pack. DC’s third straight loss puts it in jeopardy. Although still third with 14 points, its remaining games are against Mumbai Indians and Royal Challengers Bangalore, the top two.

Warner and Saha scored 77 in the first six overs, the highest this season eclipsing Royals’ 69 for one against Kings