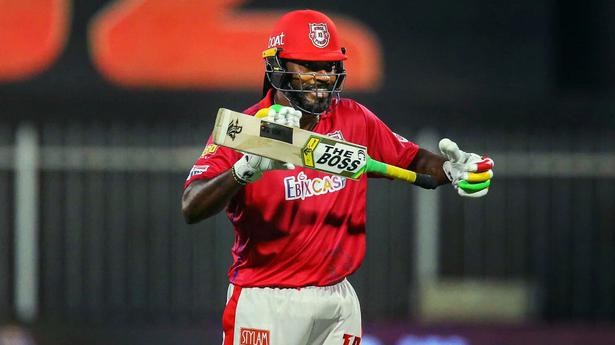 The Kolkata side slips to 10 for three before the duo adds 81; Shami, Jordan and Bishnoi shine for KXIP.

Kolkata Knight Riders began shakily, seemed on course for a recovery, but collapsed again in the face of a spirited bowling effort from King XI Punjab at the Sharjah Cricket Stadium on Monday.

It finished with 149 for nine, not a particularly challenging total on a ground with small boundaries.

It was their fourth-wicket stand of 81 that brought the innings back on track after a disastrous start.

Three of the KKR batsmen were back in the dugout inside two overs.

The first to go was Nitish Rana, the hero from the last match at Abu Dhabi two nights earlier, in which his 81 helped the team beat Delhi Capitals. He chose to sweep the first ball he faced, only to find Chris Gayle at short fine-leg. Rahul’s decision to hand Glenn Maxwell the new ball paid off handsomely.

The second over proved even more dramatic, as Mohammed Shami struck twice within a space of three balls to reduce KKR to 10 for three. Both Rahul Tripathi and Dinesh Kathik were forced to edge behind the stumps, though the latter went for DRS and lost a review.

The onus was now on captain Morgan and Gill, the team’s leading scorer in the tournament (378 runs).

They upset the bowlers’ rhythm, as both began to come down the track, even against Shami.

The first two overs from the India bowler had gone for just six runs, but in his third, he leaked 21, with Gill sending the last two balls over the ropes in style. Shami, however, had the last laugh, as he came back to dismiss the opener in the penultimate over.

BackBenchers - April 22, 2021 0
Olympic-bound world silver-medallist Amit Panghal (52kg) was assured of at least a bronze at the Governor’s Cup in St. Petersburg, Russia after he...

ABOUT US
Backbenchers is a Sports News Website From India. We provide the latest Sports News & Live Updates Also find live scores, fixtures or schedules, points table or team standings & match updates on all sports like cricket, football, kabaddi, tennis, hockey, volleyball, kabaddi and more. Also, we promote all-new sports items for you.
Contact us: [email protected]
FOLLOW US
© 2020backbenchers. All Rights Reserved. This site is an affiliated with Amazon associate account.
MORE STORIES
OTHER SPORTS