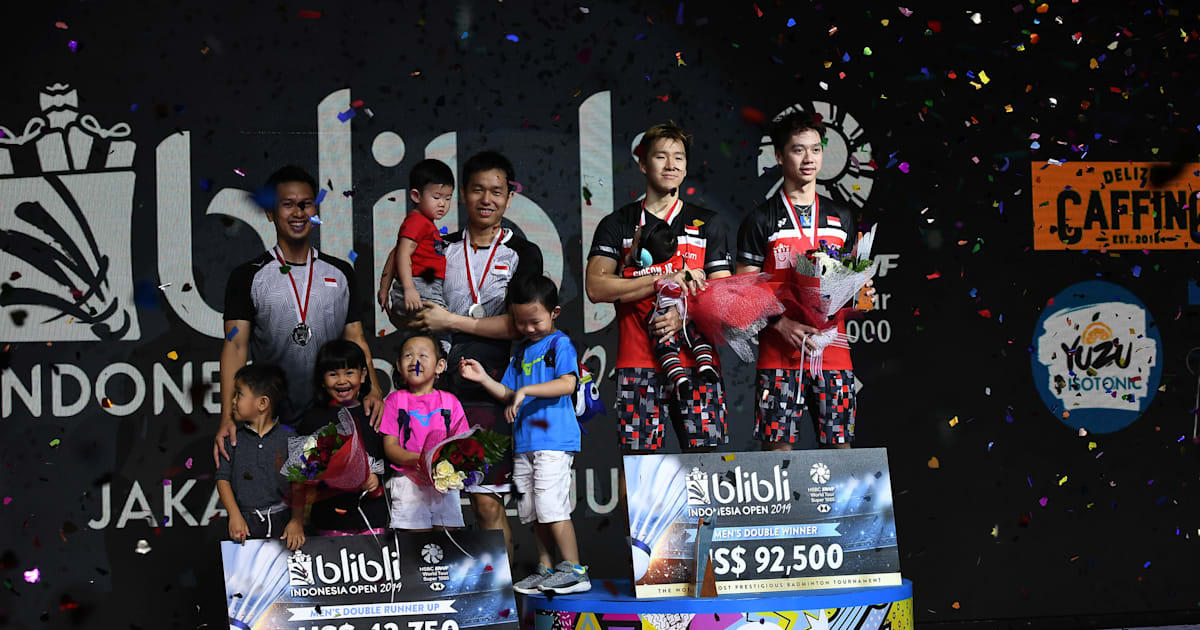 Indonesia is crazy about badminton, and it’s easy to understand why.

The men’s doubles pairs in the South East Asian country hold a special place in the hearts of their fans, so much so, the top two pairs, Marcus Gideon and Kevin Sukamuljo as well as Mohammad Ahsan and Hendra Setiawan, have been nicknamed ‘The Minions’ and ‘The Daddies’ respectively.

They shared exclusively with Olympic Channel the story behind their nicknames, as well as the relationship between the duo’s from two different generations.

“We’re not so sure about the origin but I think it’s our fans who came up with the nickname.” – Marcus Gideon to Olympic Channel

The number one men’s pair in the BWF doubles rankings, Marcus Gideon and Ke…

Gideon and Sukamuljo have been world number one since September 2017.

The younger of the two pairs, the duo also stand out for being relatively short for pro badminton players, with neither of them measuring past 170m tall.

“As you can see the both of us we’re not very tall and compared to the other pairs we go up against, they are all very tall and sometimes the difference is quite obvious,” explains 29-year-old Gideon.

To compensate, they adopt a very fast and agile play on court, and can often be seen to be bouncing around. Which is likely the inspiration behind their moniker, The Minions.

“We don’t mind, it’s a little bit of fun. And our size helps us play a much faster game of badminton so we can still be very competitive against the rest of the pairs.” – Markus Gideon

Gideon and his 25-year-old partner have won 29 international tour titles to help them top the rankings.

In comparison, Setiawan and Ahsan are in the twilight of their careers.

Thirty-six year old Setiawan, a father of three, is quick to point out that there’s not too much to decipher surrounding their nickname.

“It’s because both of us have families, and so we were named ‘The Daddies’ ” – Hendra Setiawan

Thirty-three year old Ahsan, a father of two, echoes the straightforward explanation of their nickname, adding that it reflects their time and experience out on court.

In fact, Setiawan has an additional world championship and Olympic gold medal from his previous partnership with Markis Kido.

There are many ways to create a special bond on court. Just ask Indonesia’s…

Because of their global dominance, The Minions and The Daddies have often played each other for titles.

The younger pair hold the upper hand, winning 11 of their 13 meetings, however despite being rivals on court, there’s a respect for each other that runs deep.

“If you look at the head-to-head you might assume that we’ve unlocked the key to beating them.” – Marcus Gideon

However he’s quick to point out that each time they’ve played, it’s only the smallest of margins that have made the difference. Adding “the venue is different and the speed of the shuttlecock is different and that can play a big different in influencing the outcome of the match.”.

Despite being reigning champions, the senior pair concede that their juniors are in fact the better pair, and were unlucky to miss out during the world championships.

“Kevin and Gideon are still the best” – Hendra Setiawan

Ahsan points out that they have to “focus more on placement of the shuttlecock because they are undoubtedly faster than us.”

One Team, One Goal

Despite their on-court rivalry, the Minions and Daddies are clear about being on the same page, putting their nation’s interest ahead of themselves.

“We all train together everyday at the national team and they are our role models as well.” – Kevin Sukamuljo

Adding that “before we were anything, they were already champions. So we look up to them.”

Likewise, the senior pair sees it as their responsibility to pass on their experience and help train junior players, to ensure that the depth of the Indonesian men’s doubles squad remains.

“There is constant support amongst us from the most junior players all the way to the most senior players.” – Mohammad Ahsan