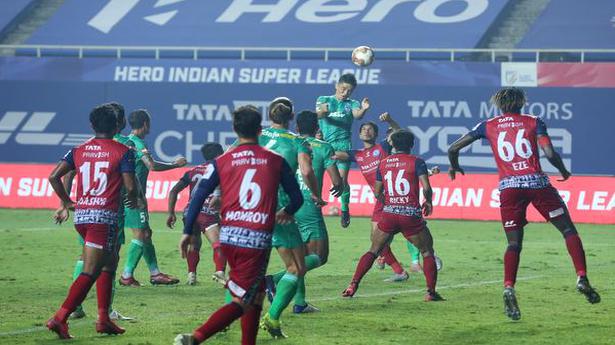 Crashes to a 3-2 defeat against Jamshedpur; Chhetri scores his 100th goal for the Bengaluru team

Sunil Chhetri scored his 100th goal for Bengaluru FC (BFC) even as the club ended its Indian Super League (ISL) campaign on a disappointing note, crashing to a 3-2 defeat to Jamshedpur FC on Thursday.

Following its eighth loss of the season, BFC finished seventh out of 11 teams with 22 points from 20 games.

Chhetri scored his side’s second goal with a powerful header but couldn’t inspire a comeback from 0-3 down. The India skipper is the highest Indian goal-scorer in the history of ISL (40 goals for BFC and seven for Mumbai City FC). He is second in the overall list behind erstwhile FC Goa player Ferran Corominas (48).

Also, on Thursday, Spanish midfielder Dimas Delgado led the team out for what appears to be his last ISL game for the club. Parth Jindal, BFC Director, tweeted a warm goodbye on Twitter but later deleted it.

In the post-match interaction, interim coach Naushad Moosa said that Delgado “will be with the team” but was not sure if the Spaniard figured in new coach Marco Pezzaiuoli’s plans.

BFC will next be in action in the AFC Cup playoff on April 14 and all foreign players except defender Juanan and mid-fielder Erik Paartalu have their existing contracts ending in the summer.

Delgado joined BFC ahead of its first ISL season in 2017 and has four goals and 14 assists to his name across four seasons. This edition, he played in BFC’s first 11 games before leaving for Spain for personal reasons. He returned for the last two matches against Goa and Jamshedpur.

“The reason he left for home is because he lost his dad,” Moosa said. “He had the courage and said he would come back and finish the league. And Sunil thought of giving him the arm band.”