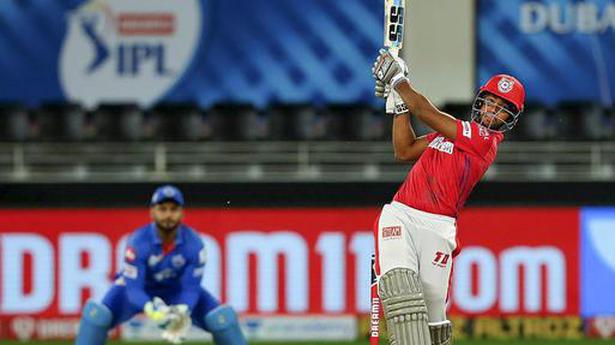 Pooran’s rapid fifty trumps Dhawan’s historic unbeaten hundred; Rahul’s men have now beaten the top three teams back to back and climbed to fifth on the table

The pitches are slowing down in the United Arab Emirates, but nothing seems to be affecting Shikhar Dhawan.

The Delhi Capitals opener scored his second successive hundred (106 n.o., 61b, 12×4, 3×6), but the effort couldn’t prevent Kings XI Punjab, which had suffered a Super Over defeat the last time the two sides met, from tasting sweet revenge.

Riding on Nicholas Pooran’s 28-ball 53 (6×4, 3×6), KXIP chased down the target of 165 with six balls to spare at the Dubai International Stadium on Tuesday.

DC captain Shreyas Iyer had the arsenal to restrict Gayle — R. Ashwin has an excellent record against him — but pacer Tushar Deshpande was introduced ahead of the off-spinner.

The youngster leaked 26 runs, with Gayle tonking him all around the park for three fours and two sixes.

Eventually, it was Ashwin who went through the big man’s gate — it was the fifth time he has dismissed Gayle in the IPL.

But Pooran and Glenn Maxwell (32, 24b, 3×4) added 69 for the fourth wicket to close in on the target, with the former constantly advancing the game with audacious strokeplay.

Indeed, Pooran’s six off Marcus Stoinis over long-on was perhaps the shot of the match.

Kagiso Rabada (two for 27), Axar Patel (one for 27) and Ashwin (one for 27) did apply the brakes, but it wasn’t enough. As a result, Dhawan’s splendid innings ended up on the losing side.

Having made an unbeaten 101 against Chennai Super Kings in the previous game, the southpaw became the first batsman to score back-to-back hundreds in IPL history.

Dhawan propped up the DC innings, doing the bulk of the scoring, as Prithvi Shaw’s miserable run continued, and Shreyas Iyer, Rishabh Pant and Stoinis couldn’t really get going.

KXIP made inroads in the middle overs and its bowling effort in the second half of the innings meant DC was “about 10 runs short”, as per Shreyas’ estimate in the post-match ceremony.

Mohammed Shami (two for 28) was excellent again for KXIP.

With the victory, Rahul’s men moved to fifth, with eight points, while Shreyas’ side remained on top.

Shikhar Dhawan not out 106

Deepak Hooda not out 15

James Neesham not out 10

KXIP won by five wickets with one over to spare

BackBenchers - April 20, 2021 0
Liverpool and Leeds players spoke out against the formation of a Super League after the teams drew 1-1 in the English Premier League...