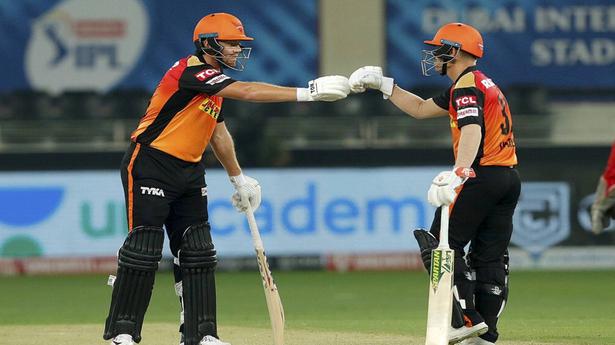 Opener sets up Sunrisers’ 69-run win with 55-ball 97; Afghan leggie removes dangerman Pooran in a three-wicket spell to seal the contest for the Hyderabad side

Pooran caused jitters for Sunrisers as he swung his bat with style and guile. The 17-ball 50 did raise Kings XI’s hopes before he fell to Rashid Khan, caught at backward point. The star leg-spinner had two other scalps as he ensured a comfortable victory. Sunrisers moved up to third on the table with their third win in six matches, while Kings stayed bottom with five defeats in six games.

Sunrisers built on the momentum gained from the first over, when Sheldon Cottrell leaked 13 runs. Bairstow unsettled the West Indian with three boundaries — the first through cover-point, the next over extra cover, and finally a ferocious pull — in the left-armer’s second over.

Rahul, who has not been ’keeping of late, dropped Bairstow on 19 off Mohammed Shami in the fifth over. The missed chance proved costly, with the Englishman smashing two sixes and a four off leg-spinner Bishnoi’s first over.

While Bairstow was ruthless, Warner kept the scoreboard moving with quick singles, fours and ambidextrous improvisations. He scored his ninth consecutive fifty against Kings XI. Rahul looked clueless at one point as Sunrisers cruised at more than 10 an over. But Kings XI did pull things back in the 16th over. The 20-year-old Bishnoi forced Warner to miscue a slog-sweep off a googly. Three balls later, he trapped Bairstow in front of the stumps.

Bishnoi also dismissed Abdul Samad to return figures of three for 29 in three overs. Afghanistan spinner Mujeeb Ur Rahman looked ordinary, but left-arm seamer Arshdeep Singh, playing in his first game of the season, impressed, as Kings XI appeared to put the brakes on Sunrisers. But despite Pooran’s knock, the target proved too far for Kings XI.

BackBenchers - March 6, 2021 0
Price: (as of - Details) Shopsmeade mugs are a great gift for any occasion be it Valentine Day, birthdays, anniversaries, graduations, promotions, retirements...