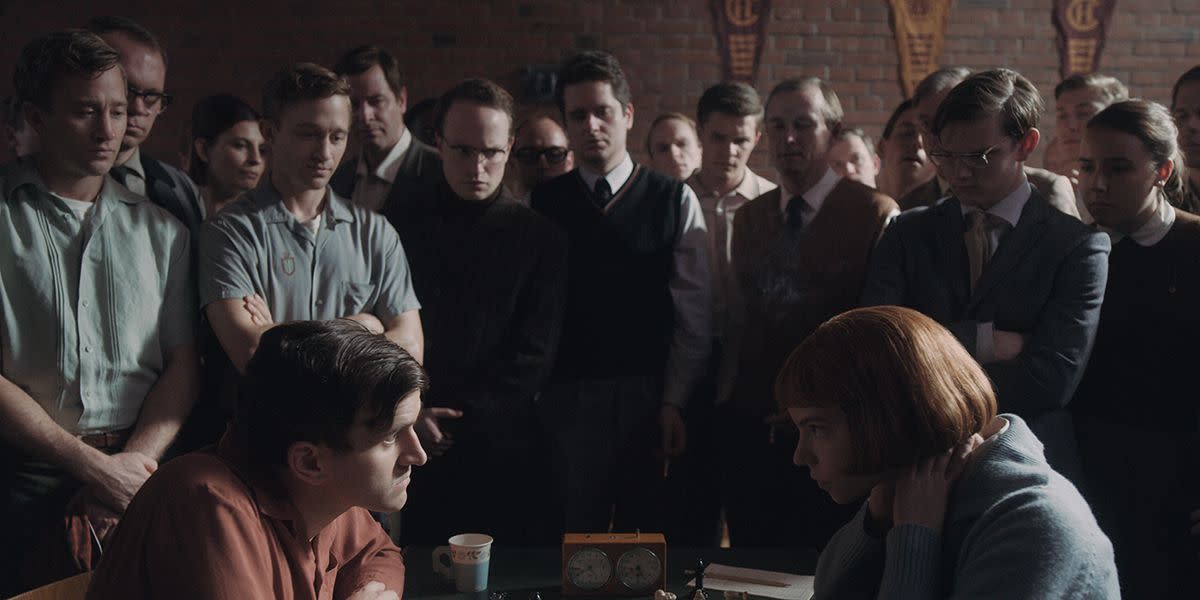 If Harry Melling, who plays Kentucky chess champion Harry Beltik in The Queen’s Gambit, looks familiar, there’s a good reason. The actor has had a busy year, appearing as a villainous scientist in the action movie The Old Guard and in the thriller The Devil All the Time—but he’s also recognizable to many viewers thanks to a much older role, that of Dudley Dursley in the Harry Potter films.

In Gambit, Melling’s Beltik is a regional chess champion who finds himself bested by Anya Taylor-Joy’s newcomer Beth Harmon and becomes a friend and teacher to her. “He becomes aware that he’ll never be better than her, so he decides to help her,” Melling tells T&C. “His greater calling becomes working with her.”

Here, Melling explains what appealed to him about the brainy, bewitching world the series creates and how his own chess skills stack up.

What first drew you to the series? Were you a chess fan?

I first met Scott Frank, the writer-director, and he told me about this script he had. He sent it to me, and I just fell in love with every facet—the characters, the story, this surreal and cerebral world that I knew absolutely nothing about. I didn’t even know how to play chess at the time, and I still found it absolutely fascinating.

Your character’s a chess champion who realizes he can’t be better than Beth Harmon but can help her reach her potential.

To talk about Harry Beltik specifically, I found his journey really intriguing. When we meet him, he’s the Kentucky chess champion, and he’s in his area hoping to reclaim his trophy. In walks Beth, and she really does burst his bubble—not only in terms of chess but also how he perceives himself and the journey he’s going to have. Then the narrative evolves, and he finds Beth at what might be her lowest point, and he really wants to help her. There’s so much to sink your teeth into. You meet all of these characters, and their heads are somewhere else. They’re constantly thinking about sequences and chess games that might have happened years ago. There’s this quality they have that makes for eccentric characters.

Did you do any research about chess or the time period the series takes place in?

There’s a chess shop in London, where I live, that I went into. They have all these books about chess, and I started talking to these guys there who really knew their stuff. I asked if they had anything on female chess players, and they gave me a book. I started reading about female chess players beating men and how the men weren’t happy about it. This was a slight catalyst of what Walter Tevis would go on to write. So, there are these little nuggets, but [the series] is fiction. Tevis obviously used characters like Bobby Fischer and other well-known chess figures to help the story along, but it is a piece of fiction. Still it was fascinating to learn about the chess world during that time. Walter’s novel and Scott’s adaptation tap into that history and make you think it must be a true story because it feels so real.

It’s a reminder that there was a time when chess players could be superstars.

It was huge! The Fischer-Spassky match was such a big thing. Today, we have this player named Magnus Carlsen who I’ve seen on a billboard—but the chess world hasn’t become what it was back in the day. Maybe we’ll spark a renaissance?

Did you learn how to play?

I really wanted to know how to play properly. The most important thing for me was to know how to move the pieces as well as I could, since that’s the story we’re telling. Whether they slide across the board or are slammed down, whether they’re used to hit the clock. Those are all things that help tell the story of who these people are.

Are you going to stick with playing?

I am! I’m really trying to. Me and my girlfriend played a bit during lockdown, and we’re trying to stick with it. But I’m not the best player—not yet.