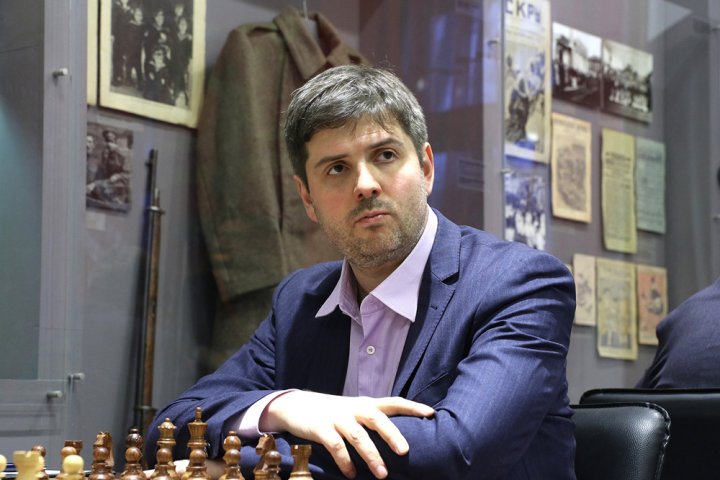 
9/20/2020 – Grandmaster Peter Svidler is an eight-time Russian chess champion. Svidler’s peak rating placed him fourth in the world. National Master Mike Walder annotates one of Svidler’s wins and has a recipe for a dish that Svidler likes. WIM Alexey Root tells why Svidler is a Grandmaster Chef honoree. | Photo: Eteri Kublashvili

Grandmaster Peter Svidler has played for Russia at ten Olympiads. He played in three World Championship tournaments, in 2002, 2005, and 2007. By winning the 2011 World Cup, he qualified for the Candidates Tournament for the 2013 World Championship.

When Svidler taught a “masterclass” for World Chess, he said that his most memorable move ever was at the 2011 World Cup, as Black against Kamsky. World Chess created a postcard about the move, though the postcard incorrectly listed 2010 rather than 2011. See if you can find Svidler’s brilliancy, which is more than one move long.

The Ruy Lopez is one of the oldest openings which continues to enjoy high popularity from club level to the absolute world top. In this video series, American super GM Fabiano Caruana, talking to IM Oliver Reeh, presents a complete repertoire for White.

Svidler also played in the 2014 and 2016 Candidates Tournaments. His most recent Russian Championship first-place finish, his eighth title, was in 2017. In September 2020, he competed from Saint Petersburg in the 2020 Champions Showdown: Chess 9LX, held online by the Saint Louis Chess Club.

Peter Svidler is easily the best chess commentator around. Hard to believe he’s actually a really strong chess player too!

When interviewing Svidler for the GRID, Woman Grandmaster Jennifer Shahade’s poker podcast, Shahade described Svidler as a “beloved commentator, and poker aficionado.” Svidler has played about 50,000-100,000 PLO (Pot-Limit Omaha) hands on PokerStars. Shahade interviewed him about Ace-Seven of Diamonds as a starting hand in No-Limit Hold ’em. Svidler broadcasts chess and Hearthstone on Twitch. His bio on Twitch is “Chess player playing games, including chess.”

At 1 hour 20 minutes into this 2020 video, Svidler is asked about food. He replied that he likes Indian or South Asian cuisines. However, his favorite dish is steak.

Mike Walder’s roommate, International Master Elliott Winslow, doesn’t like steak being cooked in their apartment. Therefore, Walder found a dish that Svidler likes and that Walder’s roommates (Winslow and FIDE Master Frank Thornally) would like too.

This DVD allows you to learn from the example of one of the best players in the history of chess and from the explanations of the authors (Pelletier, Marin, Müller and Reeh) how to successfully organise your games strategically, consequently how to keep y

The dish pictured is, according to a Google Translate of one of Svidler’s replies, “Hawaiian poke – tuna and all kinds of vegetables.” That tweet formed the basis of Walder’s recipe.

As ChessBase explained, in Round 4 of the 2017 World Cup, Svidler had won the first Rapid game (time control: game in 25/10-second increment), as Black, against Grandmaster Bu Xiangzhi. Therefore, Bu Xiangzhi had to win the second Rapid game, as Black, to avoid being eliminated. Instead, Svidler won, advancing to Round 5. Walder annotates Svidler’s win.