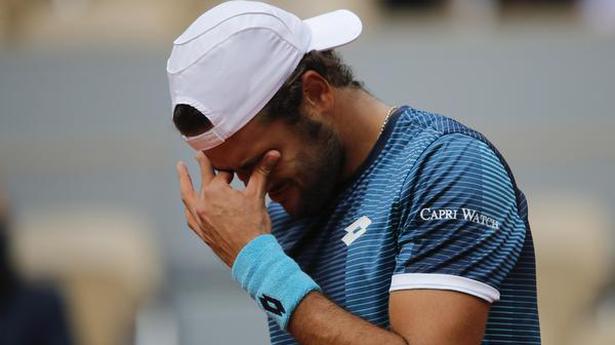 Tsitsipas and Dimitrov move up but end of the road for Agut and Wawrinka; Kenin in fourth round

Novak Djokovic maintained his imperious progress at the French Open with a 6-0, 6-3, 6-2 drubbing of Colombian Daniel Galan to move effortlessly into the last 16 on Saturday.

The 33-year-old was rarely extended by his 153rd-ranked opponent and even found time to help out with court sweeping duties when the match was interrupted by rain.

World No. 1 Djokovic swept past 153rd-ranked Galan 6-0, 6-3, 6-2 with his most challenging moment coming when he helped groundstaff lay more clay on the surface of Court Philippe Chatrier after rain had made it treacherous.

Making his debut at Roland Garros, the 22-year-old broke the off-colour Italian’s serve four times to win their first career meeting in two hours and 15 minutes on Court Philippe-Chatrier.

In the fourth round, Altmaier will meet US Open semifinalist and 17th seed Pablo Carreno Busta, who proved strong enough to beat compatriot and 10th seed Roberto Bautista Agut 6-4, 6-3, 5-7, 6-4.

Fifth seed Stefanos Tsitsipas advanced to the fourth round after his opponent Aljaz Bedene retired with an ankle injury while trailing 6-1, 6-2, 3-1.

The Greek will play Bulgarian 18th seed Grigor Dimitrov, who also went through when Roberto Carballes Baena of Spain pulled out after losing the first two sets 6-1, 6-3.

In the women’s section, American fourth seed Sofia Kenin stormed into the fourth round with a 6-2, 6-0 demolition of Romanian qualifier Irina Bara.

The Australian Open champion lost the first two games before turning on the power and winning the next 12 to reach the last 16 here for the second time.

The straightforward win was a big improvement on Kenin’s first two outings, when she needed three sets to progress. “It wasn’t as dramatic, which I’m quite happy about. I kind of was a little bit tired of those dramatic matches. I just wanted to just try to start off well and finish off really well,” said Kenin.

Tunisia’s Ons Jabeur, seeded 30th, became the first Arab woman to reach the fourth round at Roland Garros after producing a shock 7-6(7), 2-6, 6-3 win over eighth seed Aryna Sabalenka of Belarus.

Earlier this year, the former French Open junior champion had been the first Arab woman to reach a Grand Slam quarterfinal with her good show in Australia.

In doubles, Rohan Bopanna and Denis Shapovalov crashed out in the first round, losing to Jack Sock and Vasek Pospisil 6-2, 6-2.