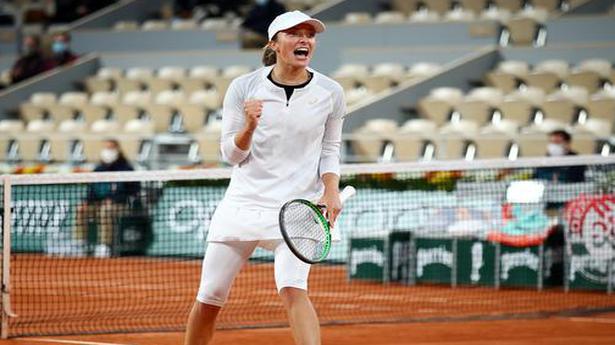 Swiatek, the only teenager who reached the fourth round, avenged a crushing defeat by Halep at the same stage last year.

Polish teenager Iga Swiatek booted top seed Simona Halep out of the French Open on Sunday with a crushing 6-1, 6-2 victory to make her maiden Grand Slam quarterfinal. Halep came into the fourth round clash on a 17-match unbeaten streak having defeated the 19-year-old Swiatek, ranked 54th in the world, 6-1, 6-0 in 45 minutes at the same stage last year in the claycourt Grand Slam at Roland Garros.

Swiatek avenged that morale-sapping defeat and her victory under the closed roof of Court Philippe Chatrier in 68 minutes was no less impressive against the 2018 French Open champion, ranked No. 2 in the world.

Halep watched in disbelief as Swiatek started with aggression and painted the red clay with winners, often leaving the Romanian rooted to the spot on the court.

Swiatek hit 30 winners as opposed to the 12 managed by Halep, while the Polish player did not face a single breakpoint on her service games. The former Wimbledon junior champion will next meet Italian qualifier Martina Trevisan, who also scripted an upset by defeating fifth-seeded Dutch Kiki Bertens 6-4, 6-4.

After a mastering the opening set, Trevisan went 3-0 up in the second before Bertens stepped up a gear to break back. Trevisan, however, held her nerve and wrapped up victory with an exquisite lob on her third match point on Bertens’s serve.

Trevisan was then joined in the last eight by Argentine Nadia Podoroska, who beat Czech Barbora Krejcikova 2-6, 6-2, 6-3, making it only the second time since tennis turned professional in 1968 that two qualifiers have progressed to that stage of the competition.

Third seed Elina Svitolina ended the run of local hope Caroline Garcia with a 6-1, 6-3 to move into her third quarterfinal here.

Svitolina, who reached the last eight in 2015 and 2017, put in a solid performance to be the highest-ranked women’s player remaining in the last Slam of the year.

In the men’s section, Rafael Nadal blew away American qualifer Sebastian Korda 6-1, 6-1, 6-2 to romp into the quarterfinals, where the 12-time champion will take on Jannik Sinner.

Korda, son of 1992 runner-up Petr, was unable to cope with the strong breeze or Nadal’s heavy spin as the first two sets went by in little more than an hour.

Italian teenager Sinner became the first debutant to reach the quarterfinals since Nadal in 2005 when he downed German sixth seed Alexander Zverev 6-3, 6-3, 4-6, 6-3.

The 19-year-old will also be the youngest male player since Novak Djokovic in 2006 to feature in the last eight at Roland Garros.

Sinner, winner of last year’s NextGen ATP Finals, dropped a set for the first time in the tournament but he never lost his composure. Sinner ended it on a windswept Court Suzanne Lenglen with a booming forehand that Zverev could only return into the net.