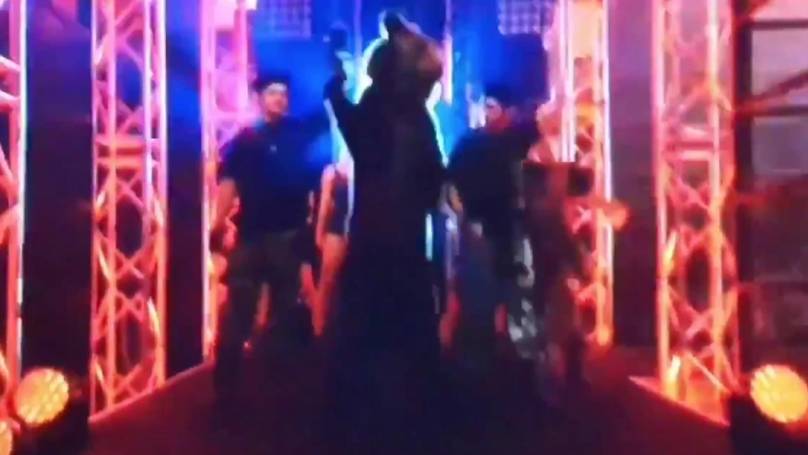 We’ve seen some bizarre boxing ring walks down the years.

But this latest entrance might just be the most bizarre – and cruel – one we’ve ever seen.

Fans were left fuming after a live bear was used during Sergei Kharitonov’s ring walk prior to his boxing bout against Danny Williams in the city of Khimki.

But while the Russian dazzled inside the ring, his performance was somewhat overshadowed by the strange pre-fight antics of strolling out to fight alongside a live bear.

Kharitonov is a well-known name in the MMA world, having secured wins over the likes of Matt Mitrione and Roy Nelson in Bellator, Andrei Arlovski in Strikeforce, Alistair Overeem in K-1 and Fabricio Werdum in Pride.

The 40-year-old Russian clearly wanted to make a big statement ahead of his boxing debut.

But instead of letting his talent inside the ring do the talking, Kharitonov had other ideas of impressing the wild home crowd.

With a live heavy metal band shredding on the guitar and screaming down the microphone, Kharitonov and his team brought out a live bear during his ring walk to face Williams.

Even the passionate, partisan crowd appeared to stop and stare at the sight of an eight-foot brown bear casually walking into the area.

And when vision of the crazy incident finally emerged online, it didn’t take long for fans on social media to share their outrage with the cruel act.

As for the fight itself, well, let’s not delve into it too much.

Kharitonov went on to demolish his British opponent in under two rounds with the referee forced to wave off the bout when Williams wasn’t responding to the official’s calls.

The entire event seemed very peculiar to say the least – and the use of a live bear was just the icing on the cake.

Max Sherry is a journalist for SPORTbible Australia. After migrating Down Under from London as a teenager, he instantly fell in love with Aussie sport and its culture. From NRL to AFL, cricket to rugby — you name it, Max watches it (with a beer in hand, of course). During his time at Fox Sports, he worked in the football department covering the Premier League, A-League, Socceroos and Matildas. Born a stone’s throw away from West Ham’s training ground, Max is obviously a die-hard Liverpool fan.