Cavani clearly was miffed at losing his place in the team last season after the arrival of Mauro Icardi. He spent part of the first half of the season injured, then saw PSG block his attempt to move to Atletico Madrid in January. (Reuters)

Edinson Cavani has posted only two updates to his 2.1 million followers on Twitter over the last 11 days, both of them showing him hard at work first on a running machine and then on the practice field.

The Uruguay striker seemingly wanted the world to know he is in good shape and ready to make his debut for Manchester United.

And he’d have been desperate for that to come in the Champions League against Paris Saint-Germain, the French club where he spent seven trophy-laden years and is the record scorer with 200 goals in 301 appearances.

It wasn’t to be, though, with Cavani not traveling with the squad as he was not deemed fit enough to play after seven months out of action since what proved to be his last match for PSG before the coronavirus outbreak led to a worldwide suspension of soccer.

Cavani mightn’t have any strong lingering sentiment for PSG when he watches the match from afar, having left the club under something of a cloud in June after refusing to extend his expiring contract by a couple of months to enable him to be involved in the pandemic-delayed finale to last season’s Champions League.

Cavani clearly was miffed at losing his place in the team last season after the arrival of Mauro Icardi. He spent part of the first half of the season injured, then saw PSG block his attempt to move to Atletico Madrid in January. 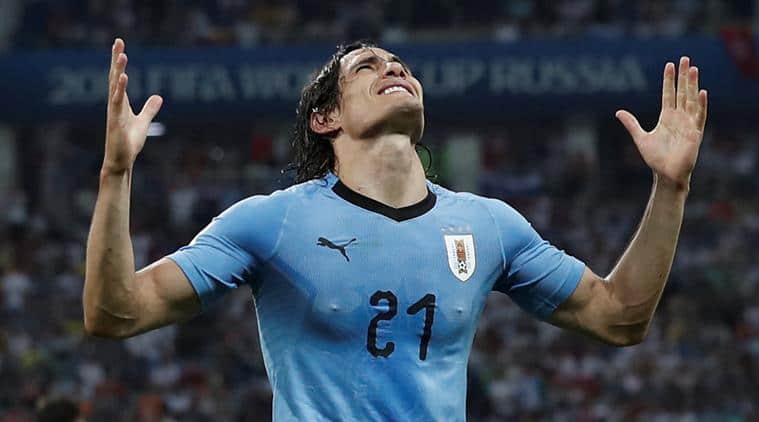 By March, when the pandemic was declared, Cavani had already decided he would be leaving PSG when his contract expired and the final stages of the Champions League getting rearranged for August wouldn’t change that.

He never got to say a real goodbye to PSG’s fans because his final match for a club where he won six French titles came in the last 16 of the Champions League against Borussia Dortmund at an empty Parc des Princes.

Now a United player after clinching a move on the final day of the European transfer window, it’s at the stadium he graced for seven years where he would have wanted to make a statement return after more than half a year out.

Once he regains his match sharpness, Cavani might still have a hard time breaking into United’s team, with Anthony Martial who is currently serving a domestic suspension and Marcus Rashford the other options up front for manager Ole Gunnar Solskjaer.

Cavani was unavailable on Saturday for the 4-1 win at Newcastle in the Premier League because he was completing his mandatory quarantine period following his move to England.

Rashford knows the quality and importance of the team’s new signing.

“He can be a massive player for us this season,” Rashford said last week.

“To win two or three trophies in a season, you need a squad. It’s not possible if you don’t have people who can score goals one week and the next week, it’s just not possible without three or four forwards in a team.

“Growing up, United always had four or five forwards who could score goals at any time. The closer we get to that, the more strength we’ll have.” Solskjaer has spoken of Cavani being one of Europe’s top goal scorers over the last 10 years and his excitement at the energy, power, leadership and a great mentality the Uruguayan will bring.

Indeed, Cavani won PSG fans over with his work ethic and unselfishness. Even when played out of position on the wing early in his time in Paris to accommodate Zlatan Ibrahimovic, he sacrificed himself for the team cause.

Cavani never complained, and or took it to heart, when PSG fans mocked and jeered some of his bad misses while he played in Ibrahimovic’s shadow. Cavani’s mental strength and self-belief made him believe he would win over the supporters in the end, and he left as one of the most popular and widely respected players in club history.

He will hope to do the same at United, once he is given the chance.

BackBenchers - March 4, 2021 0
AHMEDABAD: Rohit Sharma has been considered one of the stalwarts of Indian batting for over a decade, but quite surprisingly this is only...