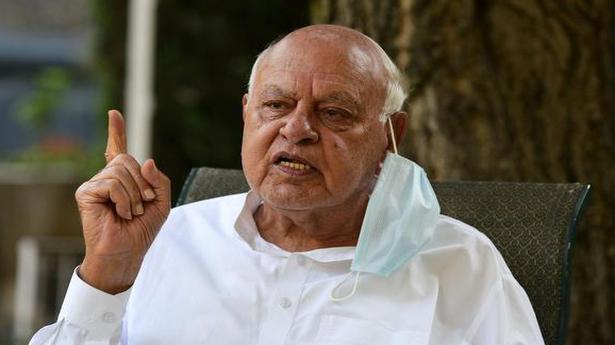 The money laundering case alleging misappropriation of ₹43.69 crore is based on an FIR registered in 2015 by the CBI on a direction from the J&K High Court

Former Jammu and Kashmir Chief Minister Dr. Farooq Abdullah was on Monday questioned by the Enforcement Directorate (ED) in connection with the alleged misappropriation of funds of the Jammu & Kashmir Cricket Association (JKCA), of which he was the president.

Dr. Abdullah, whose statements had been recorded in the case many times since 2018, was summoned to the ED’s Srinagar office for another round of questioning that went on for about six hours.

The move came days after he, along with Mehbooba Mufti (who was recently released after 14 months of detention), and some other Jammu and Kashmir political leaders came together on the issue of Article 370.

The ED’s money laundering case, alleging the misappropriation of ₹43.69 crore, is based on an FIR registered in 2015 by the CBI on a direction from the J&K High Court.

In September 2019, the ED arrested Mr. Mirza under the Prevention of Money Laundering Act after he could not explain the transaction that were under scrutiny. He was the authorised signatory in the bank accounts of the JKCA from 2004 till March 2012.

It was alleged that between 2002 and 2011, the Board of Control for Cricket in India granted ₹112 crore to the JKCA for infrastructure development and promotion of cricket. However, funds to the tune of ₹43.69 crore were allegedly diverted.

Based on the findings, in February last, the ED attached assets worth ₹2.60 crore, including a shopping complex in Srinagar, linked to Mr. Mirza and one Mir Manzoor Gazanffer, who was a member of the finance committee of the JKCA from 2006 and 2009.

The ED alleged that funds from the BCCI were received in three different bank accounts of the association. However, several other accounts were opened in its name and the money was transferred further. Mr. Mirza also allegedly diverted huge amounts to the account of his company, Mirza Sons.

From the laundered funds, ₹1.31 crore was received by Mr. Gazanffer, who was part of the finance committee “arbitrarily constituted” by Dr. Abdullah as the association president, the ED has earlier alleged.