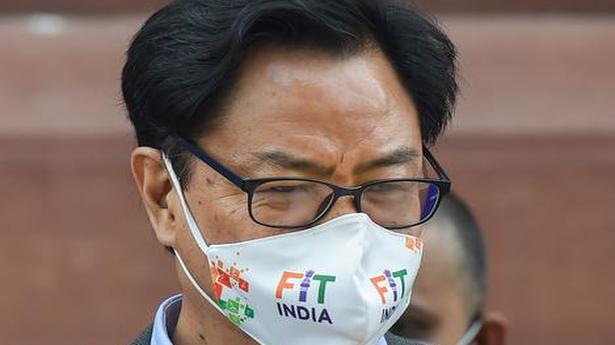 Recently, a request was placed before the ministry that shooters be exempted from hard quarantine of 14 days and foreign delegates be given vaccine shots on priority

A shorter and convenient quarantine period will be put in place for next month’s shooting World Cup, Sports Minister Kiren Rijiju has promised in order to not discourage international shooters from competing at the event.

The ISSF Combined World Cup will be held in New Delhi from March 18 to 29 with shooters from more than 40 countries, including UK and Brazil, taking part in the event.

“I have already assured that India will conduct international tournaments in such a way that COVID protocols will be followed but foreign players will not be staying in long quarantine and will not be discouraged to participate,” Mr Rijiju said after visiting the new Motera Stadium here.

Recently, a request was placed before the ministry that shooters be exempted from hard quarantine of 14 days and foreign delegates be given vaccine shots on priority.

Mr Rijiju made it clear that providing vaccine shots falls in the domain of the health ministry but they will ensure that participants do not feel any inconvenience.

“If our players are also stuck for 14-15 days in quarantine, they would also not be comfortable.

“So what we are planning is that all delegates coming from outside will have to get themselves tested before arriving and we will test them again upon their arrival at the airport. We will do it in such a way that it is convenient for them,” Mr Rijiju said.

Asked when will the process of giving vaccine shots to India’s Olympic-bound athletes begin, the minister said as of now the government’s priority is COVID warriors.

“COVID vaccine is something which Health Ministry has to decide and it has already been decided that it has to begin with COVID warriors. They have to be safe first, the doctors, nurses, security officers. After this, players and others will come.

“Obviously, the Tokyo-bound athletes, technical teams like coaching staff, trainers will be given priority but overall priority lies with home ministry and PM office. Athletes are definitely sports ministry’s priority.” The National Sports Development Code 2011 is currently governing the National Sports Federations but Rijiju insisted that it needs to be modified as per the needs of today’s times.

“There is a sports code, but we want to form a new code that takes care of the requirement of the present times. We want to change certain provisions that are not taking care of many sports that are of different nature.

“Like golf and boxing can’t be same. And for example, (if) union territories (want) to have national federations which may not be possible for some. Sports like golf, equestrian, ice hockey and skiing are some disciplines which can’t be played in every State.

“You need club culture for equestrian and skiing can’t be played everywhere. Sports code does not define all this, it just says how an NSF can be formed. A few things need to be changed. We are still deliberating over it. Rules need to be changed with times,” he said.

Mr Rijiju’s comment has come at a time when the sports ministry is locked in a legal battle in the Delhi High Court, where it is defending a relaxation clause with regards to NSFs’ recognition, which has been challenged.

The Centre last week had told the Delhi High Court that it has the executive powers to relax the provisions of the sports code, with regard to grant of recognition to national sports federations.

Advocate Rahul Mehra, who filed the application, has claimed that by introducing the relaxation clause, the ministry was trying to “negate” or “nullify” the court’s orders to ensure the federations comply with the code before they are granted recognition.

The ministry, in its reply filed through the central government contended that there was “no overreach” on its part when it passed the order on February 1.

In its affidavit, the ministry has said that the power of relaxation would be “exercised as a special exemption where considered necessary and expedient for the promotion of sports, sportspersons” and would always be guided by the sports code.

Mr Rijiju also said that a sports facility will be named after wrestler KD Jadhav, independent India’s first Olympic medallist, his remark coming at a time when there is a demand that the bronze medal winner at the 1952 Helsinki Games be honoured with the Padma Shri.

“We have already decided that a sports facility will be named after him or a new centre will be created in his honour,” he said.