When Roland Garros announced the new date for women’s singles final, October 10, sports psychologist Daria Abramovicz turned to then-unheralded Iga Swiatek and said: “Okay, now you can give me the best birthday gift.”

“The psychological work is very complex and continues all the time. Daria understands me very well and we talk a lot. She just made me smarter,” Swiatek told reporters after winning the French Open without dropping a set.

“You should not think that a psychologist is for people with problems, I think he is also for people who want to develop. The work that we do with Daria may not be ideal for everyone, because not everyone would be ready to allow a team member into their lives, but my advice is to try and see how it works.”

Iga Swiatek: Her top-spin, a new high for women’s tennis

It’s not every day that a 19-year-old athlete realises the importance of having a mental health professional by her side, let alone advocating for others to do the same. And Abramovicz couldn’t be prouder.

“I respect that a lot,” Abramovicz tells The Indian Express. “I appreciate that she’s willing to talk about it. And it won’t be an exaggeration to say that I’m proud of her because it’s not an easy topic to speak about. But I do believe, as a coach, and as an athlete for many, many years, that it is very important.”

Abramowicz, 33, took up sailing at five and competed in the Olympic single-handed dinghy class before an injury forced her to retire. It was during her time as a competitor that she realised that a high-performance athlete’s struggles could be more than just physical or technical. 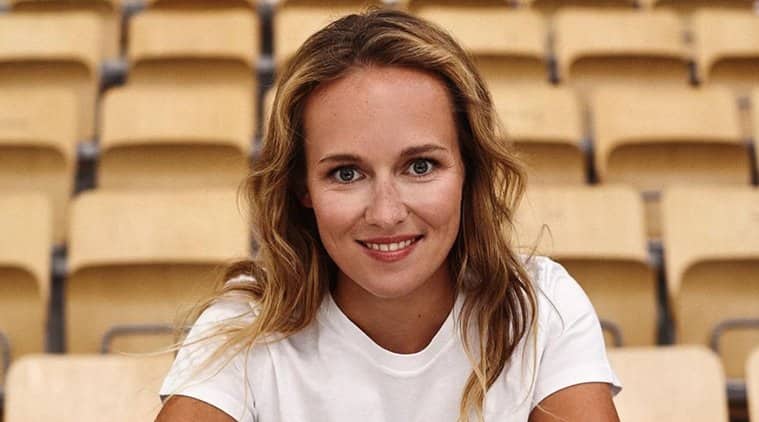 “I was 15 and competing in the European tournament. And I remember that I was sailing absolutely perfectly during training sessions just before the competition, and then something happened. I didn’t know what it was, and the coach couldn’t explain it to me. Other people couldn’t explain it to me. The internet wasn’t so popular, we didn’t have many sources of knowledge or experience. I didn’t know but I wanted to know.”

She coached Poland’s national sailing team for ten years, studied psychology and transitioned into working with cyclists and swimmers. The association with Swiatek began last year.

Abramovicz believes a similar desire to learn and know more about mental health has been the silver lining of the Covid-19.

“The pandemic has shown not only the sports environment but the society, that mental health is important in terms of a satisfying, secure life. In my experience, a lot of athletes, teams, coaches, parents have decided that it might be a good time to start working on this side of sports development, not only high performance,” she says.

“In her second professional season, there were the finals at school, the Tokyo Olympics… that would be a lot for Iga in one year. It is a little bit fortunate for her some ways, but on the other hand, we worked a lot to cope with other factors,” Abramovicz adds.

Like getting used to the tennis bubble and the lack of crowd, “strange and uncomfortable” for Swiatek “because she loves those interactions.”

“The most challenging moments were definitely in the United States during the Western & Southern Open. The restrictions, the rules were really clear and really harsh sometimes. A lot of players said that they felt that they were like living in a cold prison. In the nine weeks, we’ve had over 20 tests,” says Abramovicz.

“In the beginning, everyone felt like ‘okay, we have to wait for the result. What will happen?’ Later on, it became ‘okay, today is the test day. Yeah, yeah, let’s go back to work’. Human beings are able to adapt and adjust, and the same thing happened with the tennis bubble. Mental training helps accelerate that.”

For Swiatek, Abramovicz channelled the youngster’s love for AC/DC, Pink Floyd and Guns N’ Roses and advanced mathematics into tools.

Throughout the French Open, Swiatek would march on to the court with ‘Welcome to the Jungle’ pumping through her earphones. For the final against Australian Open champion Sofia Kenin, Abramovicz changed it to soothing jazz because the GnR number was “a little bit too loud and energetic and too fast for that.”

“We have a lot of research in terms of music’s influence on the performance, but it’s even simpler because she loves music, it’s an important part of our life. I thought, let’s use it in our work. The same was with maths when I first saw her solving problems before a competition. Use these things for her training and it becomes an enjoyable approach.”

It’s been little over a week since that day of double celebration in Paris, and Team Swiatek is on a little vacation together.

“The other day, I asked her, ‘after nine weeks on the road together, if we’re still not fed up with each other and want to spend more time together, we must be doing something right,” Abramovicz laughs.