It’s brilliant, says Anna Storozhuk of Moscow’s MDM Theatre on love-themed play with Fischer-Spassky match in background, even as the authors of 1986 creation say it is not about policies but people

Bobby Fischer, Boris Spassky, Viktor Korchnoi, … and a KGB agent. Doesn’t it throw you back to the disconcerting era? Well the musical is exactly about the deception and duplicity in diplomacy of the 70s when the US and the USSR were engaged in a game of one-upmanship.

A creation in 1986 by , an English lyricist and author of repute, in collaboration with Benny Andersson of Swedish music group ABBA and Bjorn Ulvaeus, also of ABBA as well as a co-producer of ‘Mamma Mia’ film, the musical opened in Moscow recently. It has reportedly touched a chord with Russians when it was premiered at Moscow’s MDM Theatre. “This is possibly the only theatre production of such a scale in the world at the moment,” the organisers said.

The instant endorsement of the musical by Muscovites is an emphatic indication that the much-maligned Soviet Iron Curtain has well and truly been breached. An otherwise not so pro-Russian Cold War theme of two superpowers would not be welcomed, leave alone appreciated, in Russia in another era.

“It’s a brilliant musical. Tim Rice emphasises in his interviews that this is not about policy, it is about the people. The artwork is the most international Russian musical and authors have positive attitude towards the Soviet chess masters in my opinion,” Anna Storozhuk of MDM Theatre tells Mirror.

Dmitry Bogachev, producer, CEO of Broadway Moscow Theatre Company, says, “CHESS, an acknowledged theatrical phenomenon, has taken on a renewed relevance these days. Behind the scenes of great victories and bitter defeats in any stand-off, there are always real people. Each with a complicated destiny, living out their emotions and acting at the limit of their abilities.

“From the musical theatre point of view, there is absolutely nothing as great, monumental and meaningful as CHESS. When two years ago after many years of hesitation I took on this material, I promised myself to create an interesting, spectacular and emotional production, worthy of its magnificent music, and to carry the production process through, so that after 35 years Russian audience could finally experience this glorious musical! We all have the feeling of euphoria about what we are creating, and that’s why we don’t feel neither fatigue nor fear.” 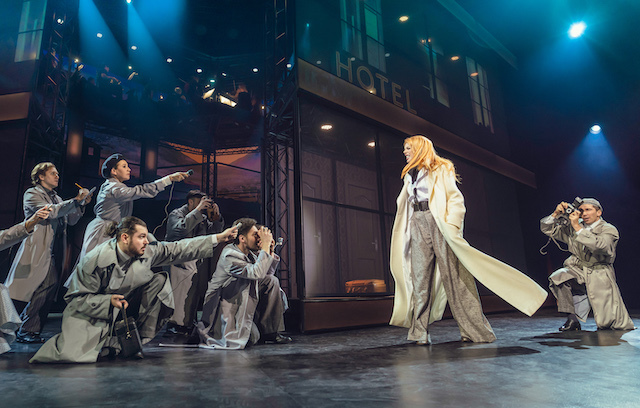 Among those present at the recent inaugural were Sir Rice and Karpov himself, a former world champion. His match with Korchnoi in 1981 is believed to have formed the basis for the play.

Rice is thrilled at the Russian endorsement of his creation. “I just wanted to say, how incredibly grateful and excited I am… It is going to be a terrific show! I’ve seen the arrangements, I’ve talked with the people working on the show. I know it’s going to be a great performance. I’m sure the show will be around for quite a long time in Russia.”

The original storyline of the musical is a triangular love story between an American and a Russian Grandmaster with a woman, who is a manager to one and loves the other. But over the years creative liberties have been taken and changes made to the plot.

The Russian team that is associated with the musical are director Eugene Pisarev, musical director and conductor John Rigby and choreographer Irina Kashuba. It is set to run in Moscow for seven months before going to other Russian cities.

BackBenchers - April 20, 2021 0
Liverpool and Leeds players spoke out against the formation of a Super League after the teams drew 1-1 in the English Premier League...