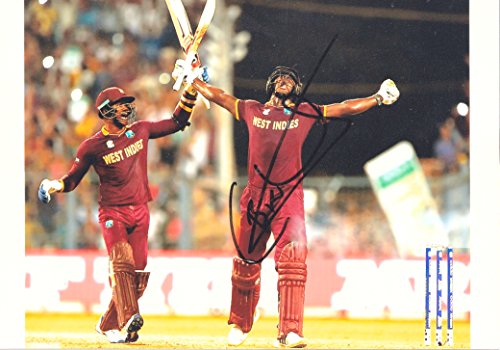 A West Indian cricketer from Barbados and the current captain of the West Indies Twenty20 International team Carlos Ricardo Brathwaite made his T20I debut for the West Indies against Bangladesh on 11 October 2011 and is the current captain of the T20I side. He made his One Day International debut seven days later in the same series. During the West Indies tour of Sri Lanka in 2015, he scored 113 from 58 balls against Sri Lanka Board President’s XI and shared a 193-run partnership for the eighth wicket with Andre Russell at Colts Cricket Club Ground, Colombo, to help his side recover from 7 for 109 to 318 in a 50-over game. This rare product carries within itself the coveted autograph of this famous sports personality.
Having hit four consecutive sixes in the first four balls of the last over in the final of 2016 ICC World Twenty20, this signed memorabilia will be a delight for any fan who wants to celebrate the charisma and phenomenon named Carlos Ricardo Brathwaite.
This one of a kind signed photograph has been curated by the seller and has very limited availability. Make one yours today.