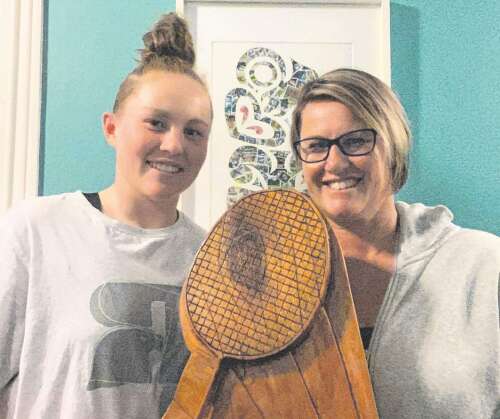 THE honours on the final night of the BIZminton2020 mercantile badminton competition went to 3P’s + 1.

They defeated Uawa (1) 6 matches to love to clinch the trophy.

The 3P’s + 1 team of Gabe Perano, Stella Perano, Dane Berry and Debbie Brown (in the absence of Rubi Perano) dominated their final tie of the competition from the start.

Uawa (1) — Cynthia Sidney, Kahu Brown, Manaia Puha, Shanan Gray and reserve player Te Aomihia Walker — had to wait until the last match of the tie to get close to recording a win. The Uawa pairing of Puha and Sidney came back in the latter stages of their match against Gabe and Stella Perano before losing by three points, 26-23.

The plate section was won by Nga Uri a Maui, with Team A runners-up. Both teams were new to the competition. The improvement in both teams over the five weeks was amazing, and it was great to see a few old hands enjoying their return to the badminton courts.

All finals matches were competitive, but accompanied by lots of laughter. Easy shots were missed among some fantastic play and amazing shots.

Spot prizes were won by the Stanley Family, Enterprise, Team A and Slammers. Social distancing requirements meant no supper was served, but a quick prize-giving was held immediately after the last games.

Two of the three p’s: Stella Perano (left) and her mother Gabrielle Perano with the BIZminton trophy won by their team, 3P’s + 1. Normally Stella’s sister Rubi would have been in the team, too, but she was away on a school trip on the final night and was replaced by Debbie Brown. Dane Berry was the other permanent member of the team. Picture supplied