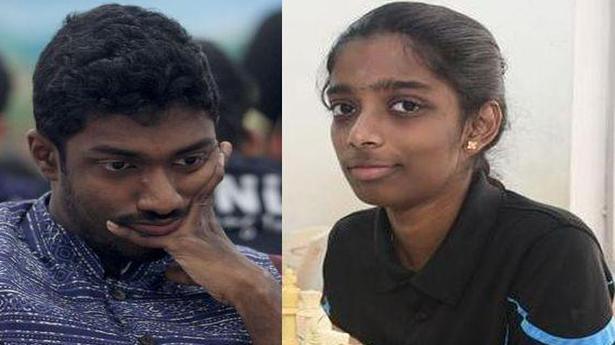 B Adhiban and R Vaishali shone bright as the top-seeded Indian men and women teams entered the finals of the Asian Nations (Regions) Online Cup championship with victories over Kazakhstan and Mongolia respectively on Saturday.

B Adhiban notched up important victories over Rinat Jumabayev on the top board in both his matches.

In the first match, India rode on Adhiban’s win while Nihal Sarin, SP Sethuraman and K Sasikiran drew their games.

In the second match, Adhiban, Sarin and Sethuraman won their respective games but Sasikiran suffered a defeat at the hands of Denis Makhnev.

In the women’s semifinal, India were in dominant form and won both the matches comprehensively.

R Vaishali, winner of the gold medal on the top board in the preliminary phase, won both her games against Batkhuyag Munguntuul.

The team led by Woman Grandmaster Mary Ann Gomes will meet Indonesia in the final on Sunday.

Apart from Vaishali, Padmini Rout and P V Nandhidhaa recorded wins against their opponents in the first match, while Gomes drew her game.

In the second match, there were wins for Vaishali, Bhakti Kulkarni, Rout and Nandhidhaa as Indian team won 4-0.

BackBenchers - December 1, 2020 0
Badminton Industry Outlook 2020 The outbreak of covid-19 in the global market has made companies uncertain about their future scenario as the prolonged...

10 New Indian Web-Series And Movies We Can’t Wait To Stream...

India vs Australia: ‘We have got a few options’, Finch names...

Olympic rings back in Tokyo Bay; a sign of hope in...

The Best Exercise Balls for the Home Gym

Volleyball: Flower Mound vs. Byron Nelson will feel like a state...

Politicisation of sports in India; how to run sporting federations

Why Ohio State is staging basketball games at the Covelli Center...

The Alo Yoga leggings celebrities love are on sale for Cyber...

Why You Shoud Learn to Play Chess ! By Fatima Muman...

Lennox Lewis: ‘I knew I would meet Mike Tyson in the...

NewsCenter | SDSU | No Sacrifices Required for This “Chess” Opening

‘Olympics delay is a blessing in disguise’