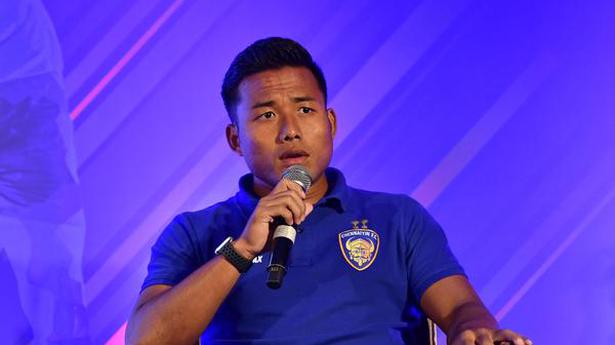 The Mizoram Football Association (MFA) has resented a ‘snub’ to Indian national team striker Jeje Lalpekhlua despite his nomination for the Arjuna Award thrice since 2017.

The Arjuna Awards are given annually by the Union Ministry of Sports and Youth Affairs for outstanding achievement in sports.

The MFA has sought a clarification from the Union government for “ignoring” the 29-year-old Jeje.

The association has in a letter asked Union Sports Minister Kiren Rijiju to provide the reasons why Jeje was excluded this year – the third time in four years – from the awards despite “notable achievement” for the country.

The striker from Mizoram was nominated in 2017 along with footballers Gurpreet Singh Sandhu and Bembem Devi, who was the eventual winner.

Jeje was nominated twice later but lost out to the lesser-capped Gurpreet and Sandhesh Jinghan in 2019 and 2020 respectively, the MFA said.

“While the MFA acknowledges and applauds the Indian footballer awardees, it insists upon the disclosure of the detailed criteria for the Arjuna Award as well as explanation why Jeje was overlooked after three separate nominations,” the association said.

“Jeje has earned 56 caps for India, scoring 23 goals, second only to Sunil Chhetri in the national scoring charts among active players. He is currently ranked sixth on the all-time scorers’ list. Gurpreet and Sandhesh, who both have earned worthy acclamation through their storied careers, have earned 38 and 36 caps respectively,” the MFA noted.

The association pointed out that Jeje outweighed the others in “personal accolades” and as the most decorated Indian footballer for club and country.

“When you consider the last two Arjuna recipients, Jeje is the only one awarded the AIFF player of the year. It is ironic that somebody is not recognising what the federation is giving, apart from the fact that Jeje is the most capped player,” Mr Hmar told The Hindu on Thursday.

“If you do not want to give the award to him, why insult him by nominating at all?” he asked.