Home Chess Alexander Donchenko: The importance of working hard at the board 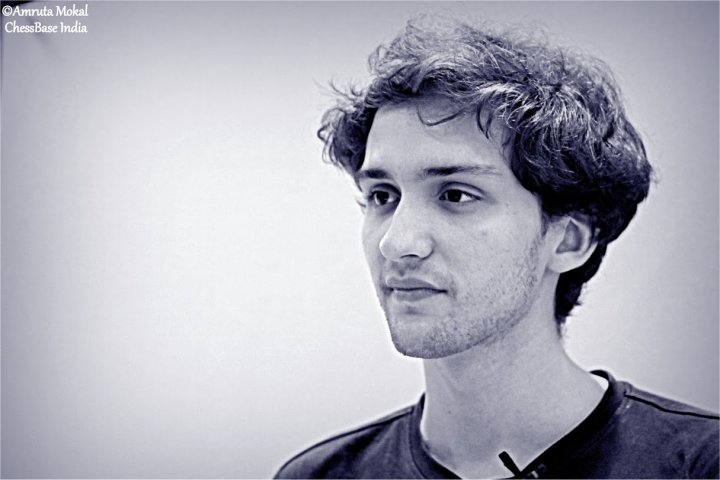 
9/27/2020 – Alexander Donchenko won the ACP-ChessBase Knockout Tournament, which took place in the Emanuel Lasker Arena of the PlayChess server a couple of months ago. In an interview with Bojana Bejatovic, the German grandmaster talked about online chess, the psychological factor in the game and his advice for aspiring players. “No matter how much or how little you trained, you must be able to show as much of it as you can when it matters most, during a tournament game”, says Donchenko. | Photo: Amruta Mokal

An interview by Bojana Bejatovic, originally published on the ACP website

Our congratulations on winning the ACP-ChessBase KO Event! How do you feel?

I am very happy that I managed to stay focused throughout the event and play some quality games against high-level opposition. I also feel (or rather felt) tired after each match, as four rapid games against such opposition are very serious indeed.

I did little specific preparation, maybe around 20 minutes for each opponent. Apart from that I simply tried to be rested at the starting time and perhaps take a nap beforehand. Occasionally I play Titled Tuesdays or Titled Arenas but generally I do not play a lot online and this was likely my first online tournament with a rapid time control.

What do you think of these online events compared to the regular OTB tournaments? Which one do you enjoy more, and what/how is the psychological aspect behind OTB and an online game?

Online tournaments have always been something of an easy pastime for me, not to be taken seriously. This is mostly due to them being more casual than OTB events, as there is no rating on the line and the time controls are usually shorter. The lack of a physical opponent also contributes to the fact that I have hardly ever been willing and/or able to give my best in online events. Unfortunately, in large Swiss events, and to some extent in all online tournaments, cheating can as well never be ruled out, no matter the precautions. This is also the main reason I believe online tournaments cannot and should not vie for the same status as OTB events.

In the third game against GM Vitiugov, there were interesting opportunities, as in the final game of that match, which led Alexander to the finals. In the finals, Jones managed to save the second game, although it was not an easy task with such great winning chances for White. [You can replay these three games below].

How do you cope with the psychological aspect after missing some opportunity during the game? Does that influence you for some time or you just accept it and look towards the next challenges that the new position is offering?

This is possibly one of the hardest things to learn in chess because it can best be trained by suffering through the experience. It is usually a question of your state of mind and can certainly never be perfected. A good example from my games occurred at my last tournament in Ceske Budejovice. During my round 4 game with Michalik I did not play 20.Nxc5 (I saw the move but discarded it) and realized my mistake right after my move. Still, I managed to play reasonably well after this missed opportunity and put some pressure on my opponent, even though it was not enough to win the game.

What is the most important thing a chess player must do for chess?

There are probably innumerable answers to this, but I will go with dedication at the board. No matter how much or how little you trained, you must be able to show as much of it as you can when it matters most, during a tournament game. Otherwise your actual performance will always chase after your ability.

What is more important — understanding or knowledge?

From a not so high level onwards both will be absolutely necessary to at least some extent. But if forced to choose I would go with understanding. Firstly, it is possible to play with good understanding and no knowledge whatsoever, but not vice versa. And secondly, knowledge is much easier to acquire, especially if you are already an established adult player.

What was the best advice given to you and what advice would you give to the aspiring players out there?

One of the best pieces of advice given to me was that no amount of talent can completely replace the work necessary for big successes and that both will be required for that. I was always quite lazy when it comes to analyses, exercises, etc. and started working on that much later than I could have. I would tell aspiring players that, despite what I just wrote, the most important thing is still their performance at the board (see also *). The love of playing games and fighting in tournaments is not something you can learn like an opening, so preserving and developing it will be necessary for most other improvements to bear fruit.

On this DVD GM Adrian Mikhalchishin presents games of the World Champions of the past to explain typical patterns and strategic concepts of these games and to show how grandmasters apply these ideas today.

Do your thoughts have patterns (according to the knowledge) or you let the creativity/imagination work on its own?

I believe that every chess player (me included) thinks in patterns, even subconsciously. The accumulated knowledge of these patterns both make us find good moves easily and fall prey to exceptions. Balancing it with “raw” calculation and improving this intuitive thinking is a large part of success in my opinion.

Can achieving nothing make a person happy? 🙂

This is too philosophical question for me. We would have to know what “nothing” describes or includes and if achievement pertains only to the person’s own set goals. All I can say is that achievement in a context of competition and/or recognition is in my opinion not necessary at all to make most people happy.

And the final question. Do you think chess came to its point where nothing more can be invented and can we really know everything in chess?

I think quite the contrary is the case at the moment. When we analyze positions deeply nowadays, (ourselves or with an engine) we discover hidden opportunities in many situations. Every meaningful novelty and every new variation shows us what we missed so far and that there is plenty more to find. Thus, I believe that the journey to “solving” chess is far from over and that there is still a lot of room for improvement and progress. Whether perfection or complete information (in the sense of perfect play) is attainable in the foreseeable future or not, it should be irrelevant to a practical player for his decisions at the board.